At a glance – see who is playing where and when as the Men’s NCAA Division I Conference Tournaments get underway.

San Diego State, the regular season champions, entered the Mountain West Conference Tournament as hot favourites boasting an overall record of 28-1 and a conference win-loss of 17-1. The number one seeding in the MWC took the Aztecs directly to the quarter-final where they took care of business beating Air Force 83-76. Yanni Wetzell, this week named to the All-Mountain West Conference Third Team, scored 16 points and added 3 rebounds and a couple of blocks. The Aztecs face #5 Boise State in the semi-finals tomorrow.

The Portland Pilots disappointing West Coast Conference season came to an end with a 76-62 defeat at the hands of Santa Clara in the first round of the WCC Tournament. Taki Fahrensohn, who found himself in foul trouble early on, finished with 3 points, a pair of rebounds and a steal. 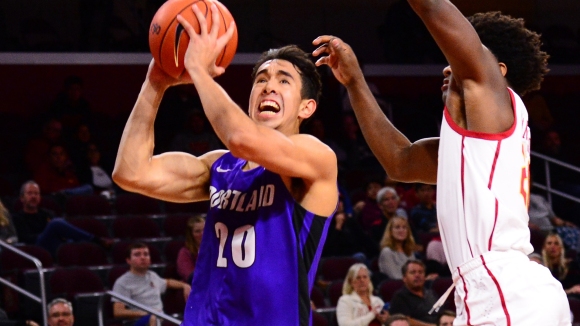 A disappointing 2-14 in the Big East Conference the Blue Demons meet Providence in their final regular season game.

Abilene will face Incarnate Word University in their final Southland Conference regular season fixture. At 14-4 Abilene have a shot at clinching the second seeding for the conference tournament next week.

The senior guard plays his final regular season game for the Hornets at Portland State.

Houston Baptist Huskies wrap up Southland Conference play with a road trip to Texas A&M Corpus Christie. With just the top eight teams progressing to the Championship Tournament the  4-15 Huskies miss out.

Washington head to Arizona for their final Pac 12 encounter hoping to improve on their 3-13 record ahead of the play-offs.

Miami travel to Georgia Tech for their final ACC regular season game with a 6-12 conference record ahead of tournament play.

Charlotte 49ers (10-7) will host Louisiana Tech in their final Conference USA fixture ahead of the play-offs hoping to improve on their 9-7 record.

USD (10-6) will carry third seeding into the Summit League play-offs where they will take on #6 North Dakota.