The Tall Ferns were defeated by quality Asian opposition for the third time in as many days at the 37th William Jones Cup in Taiwan, losing 75-56 to South Korea. END_OF_DOCUMENT_TOKEN_TO_BE_REPLACED

Following the loss to Chinese Taipei on the opening day of the 37th William Jones Cup in Taiwan the Tall Ferns took on Japan in the early game on day two. The Tall Ferns fell behind early and were eventually beaten 78-66 END_OF_DOCUMENT_TOKEN_TO_BE_REPLACED

Both teams had a 5-4 record entering the game and appear to be in a three-way battle for the fourth play-off berth with Onehunga. Westlake, Rangitoto and Auckland Grammar look to have the top three places secured. END_OF_DOCUMENT_TOKEN_TO_BE_REPLACED

Committed Gallaher ready for the Opals 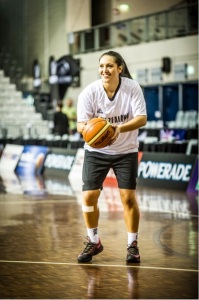 It is rather unusual to find a pair of sisters in contention for a place on an international sporting team but the Tall Ferns selection camp has a rather unique situation whereby three sisters, Natalie Taylor (nee Purcell), Hailey Purcell and Kalani Purcell, are vying for selection.

The prospective Tall Ferns players have gathered in Auckland to trial for places on the roster to compete in the FIBA Oceania Championship Series against Australia in August, with the winner earning a place at the 2016 Rio Olympic Games.

Older sister Natalie is an established Tall Fern having competed at the 2008 Olympics in Beijing after debuting for the Ferns in 2007. She is currently playing for top of the table Gladstone Power in the Queensland state league.

Youngest sister Kalani debuted in 2013 against Australia and since then the 20 year old has enjoyed an outstanding two years stint at Hutchinson Community College in Kansas where she became the most decorated player in the Blue Dragons Women’s basketball programme.

Kalani heads for Brigham Young University in August holding an incredible eight career records from Hutchinson including most points, 1,176 and most rebounds 855.

“That was cool, it was good experience and I had an awesome time playing for the Sheffield Hatters – we won the competition!”

For Hailey it is exciting to be at her first Tall Ferns camp.

“I’ve always been aiming to make the Tall Ferns squad, I have always dreamed of playing with my sisters on the national team.”

Hailey is also a realist with perhaps only a couple of forward’s spots up for grabs.

“We are all going for the same position so I have to show my strengths. I have to show something that the coaches will want to have as part of the team”

The sisters teamed up in the 2013 New Zealand Women’s Basketball League when they played for the Auckland Counties Manukau Lady Hawks.

It would be something unique and special to do the same on the international stage.

Just a few days ahead of the Tall Ferns trial a number of players were enjoying an outing with their Australian club sides at the weekend before heading to Auckland for the trial commencing on Thursday.

Gladstone Power, the leaders of the Queensland Basketball League, hosted bottom of the table Suncoast Clippers. Predictably the Power was far too strong for the Clippers winning 117-43.

Charmian Mellars continued her run of impressive form posting a massive double double of 31 points and 13 rebounds. Sister Natalie Taylor scored 21 points and Jess Bygate chipped in with 5 points as the Power improved their record to 12-1.

Micaela Cocks was absent from the Townsville Flames team, her leadership and scoring punch were greatly missed as the Flames went down heavily against Cairns Dolphins 90-61.

Over in Western Australia Lisa Wallbutton had a handy 10 points and 5 rebounds as Willetton Tigers defeated Stirling Senators. The eleventh placed Senators were no match for the second placed Tigers losing 80-56.

In the Big V League in Victoria, Hume City Broncos suffered a surprise 57-49 defeat at the hands of the Bulleen Boomers. Samara Gallaher top scored for the Broncos scoring 17 points, the defeat just the second loss of the campaign for Hume.

Gallaher also wrestled 3 steals during the game and leads the V League in this statistical category averaging 2.3 per game.

Third on the ladder Southern Peninsula Sharks (14-4) secured an impressive win defeating second placed Ringwood Hawks (15-3) 70-63 on Saturday. Kiwi Chevannah Paalvast maintained her good form with 15 points and 6 rebounds. She will leave for her hometown of Auckland for this week’s trial in good heart.

The 2015 Under 17 National Championships reached their conclusion at North Shore Events Centre on Saturday afternoon. The two finals were conclusively and ultimately comfortably won by Waikato (Girls) and North Harbour (Boys).

The girls final began with Canterbury Metro in the ascendancy, the southerner’s offence displaying fluency, led by Rosie O’Shea and Esra McGoldrick, as they moved to a 22-16 first quarter lead.

In the second period Waikato really clamped down on the Canterbury scorers restricting them to a meager six points in the quarter. Tragically Canterbury lost their stand out forward McGoldrick with a knee injury late in the quarter, the team’s leading rebounder forced to watch the remainder of the proceedings in a wheelchair at the end of the team bench.

With the scores tied at 28 apiece Waikato guard Hayley Ellis launched a speculative shot from just inside the opposition half as the half time hooter sounded. The shot hit nothing but net and Waikato were ahead 31-28 at the break.

Kendall Heremaia, later nominated Tournament MVP, was in dominant form for Waikato and had 13pts and 11 rebounds in the first half. She continued her powerful display in the third quarter ably assisted by Kaylee Smiler and Zhanay Hettig.

Paige Willman and Sapphire Wairau made a couple of nice baskets for Canterbury but the Waikato domination continued and by the end of the third quarter they had one hand on the trophy with a 52-37 lead.

Captain Rosie O’Shea was terrific throughout for Canterbury but she could do nothing to halt the Waikato momentum as they eased further away in the final quarter. Congratulations to Waikato coach Anthony Corbin on adding another national title to the FIBA 3on3 U18 championship he orchestrated last month.

The Boys final started a little slowly, both teams suffering from Grand Final nerves but then North Harbour recorded a heady twenty points in the last five minutes of the period, capped off by back to back dunks from Thabo Manyere, to lead 32-9 at quarter time.

Waikato made a stronger start to the second quarter, Hamish McDonald and Thompson Karena-Reed made important baskets as the two teams traded points.

Waikato raised the interest of the good-sized crowd with a strong surge at the back end of the period but still trailed 56-37 at half time.

The impressive duo Sam Waardenburg and Brayden Inger were both in double figures for Harbour at the interval.

McDonald, revitalised by the half time breather, attacked the Harbour defence relentlessly in the third quarter amassing 14 points in the period. Logan Vaglar also chipped in with a couple of neat baskets but the all round scoring capability of Harbour kept the hosts on the front foot, 82-64 to the good with ten minutes to play.

McDonald again and a triple from Simmons Te Kopore kept the Waikato fans interested but an unsportsmanlike foul from Kingston Higham handed Harbour some easy points. Harbour guard Marc Malingin put on the after burners to make an impressive basket but the highlight of the final quarter was a Waardenburg jam.

The Harbour forward collected a Dan Fotu lob pass to slam down a dunk that Tom Abercrombie would have been proud of.

That move capped off a fine performance from the tournament MVP who led the scoring as his team eased to an impressive win.

Harbour coach Kenny Stone now has two age group national titles to add to his two NBL titles as coach of the Auckland Stars and five titles as a player.

Paul Henare has today named his first roster as head coach of the national programme, with 14 players named to travel to Europe for games against Great Britain, Croatia and Slovenia before that number is further reduced to 12 for the Oceania Series against Australia in August, with the winner booking a place at the Rio 2016 Olympic Games. END_OF_DOCUMENT_TOKEN_TO_BE_REPLACED