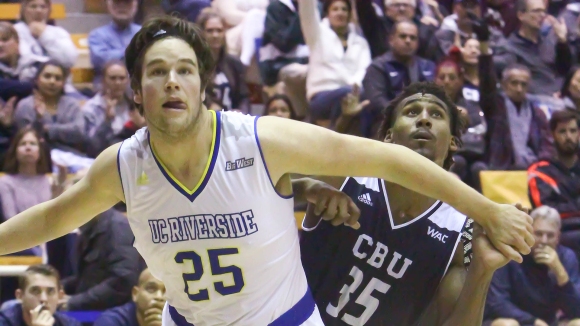 It’s not often an NCAA Division I Men’s basketball game involves three Kiwis but the match-up between Sacramento State Hornets and UC Riverside was just that.

Callum McRae, the former Palmerston North Boys High standout recorded his second double double (11 points and 12 rebounds) in as many games but it wasn’t enough to prevent University of California Riverside going down 62-49 to Sacramento State.

It was nice to see Angus McWilliam playing meaningful minutes for Riverside. The Cantabrian forward played 15 minutes in his second outing for the Highlanders since transferring from TCU and contributed 3 rebounds and 3 points.

Former Tall Blacks guard Izayah Le’afa had a solid game for Sacramento State. The Wellingtonian finished with 7 points, a pair of assists and 4 steals and knocked down perhaps the biggest shot of the game, a corner three that put the Hornets up with 2:13 to play.

The Hornets have begun the season 2-0, the Highlanders 2-1.