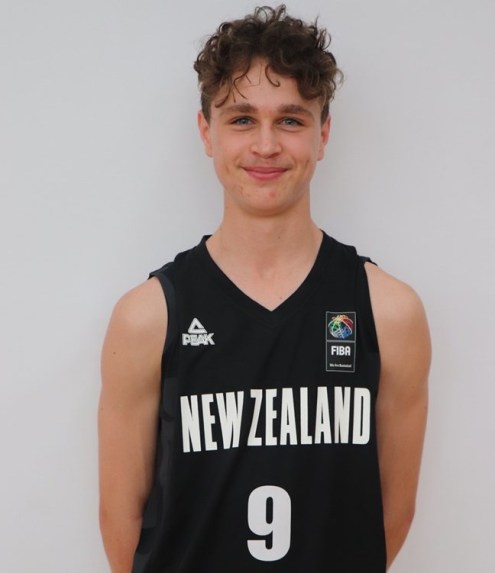 Rangitoto College are the outright leaders of the Auckland Secondary Schools Boy’s Premier League. Rangitoto beat Rosmini College in double overtime and with St Kentigern losing at Auckland Grammar the ‘Boys from the Bays’ are the only unbeaten team after five rounds of competition.

The Rangi versus Rozza clash was a hugely entertaining game punctuated by extreme fluctuations of scoring form that was eventually decided after 49 minutes and 57.4 seconds of action.

With 2.6 seconds of play left in the second extra period young Rangitoto guard Zach Riley stepped to the free throw line with the scores locked at 99 points apiece. He calmly knocked down his first attempt and with so little time left on the clock intentionally missed the second. Dallas Clayton grabbed the offensive rebound for added security enabling him and his teammates to celebrate a fifth straight win.

Earlier Rosmini had made the better start as Marvin Williams-Dunn found his way to basket on multiple occasions to give the visitors a 24-18 first quarter lead. A fairly even second period ensued – Rosmini still ahead 41-32 at the interval.

The relatively sedate first half was followed by carnage in the third! Inspired by Harry Payne, Jared Thornton and Obadaiah Paea Rangitoto unleashed a 24-0 run , yes twenty-four points to zero, before a Terence Abdon three stopped the bleeding. Rangitoto amassed 33 points in the quarter with the afore mentioned trio sharing all but five of those points.

Reeling at the three-quarter mark with a 65-49 deficit Rosmini turned the game on its head at the start of the fourth. Rangi could hardly get the ball out of there own half as the defending champions, inspired by Jayden Boucher’s work, ramped up the defensive effort. They couldn’t quite match the second quarter run of Rangitoto but it was mighty close. 22-2 to be precise as Sean Murphy, Reihana Maxwell-Topia and Abdon capitalised on numerous Rangi turnovers to forge a 71-67 lead.

The regular time drama hadn’t finished. Murphy (32 points) knocked down his third triple of the period to tie the scores (77-77) inside the last two minutes and when Williams-Dunn converted a trademark slashing dive with 10 seconds to play a Rosmini win looked likely. However Payne had the last say – a composed close range finish from the Rangi captain tying the scores. Fouled in the act of shooting, the game’s leading scorer (33 points) saw his potential match winning free throw rim out.

The two teams traded baskets in the first overtime period, a Williams-Dunn triple cancelling out a similar effort from Ethan Skelton –  the raucous crowd given an extra five minutes entertainment with the score locked at 90 points each.

A Thornton tip-in was cancelled out by Maxwell-Topia and despite losing Williams-Dunn, Boucher and Murphy with five fouls apiece Rosmini led 99-97 with 45 seconds to play. However it was the impressive Riley that had the final say, scoring on the next play before landing the all important game winner.

Auckland Grammar unleashed a double-barrel assault, in the form of Jaga Mete and Connor Ngan, to inflict a first defeat of the season on St Kentigern College (93-79).

The heaviest shots were fired in the fourth quarter as Ngan released a barrage of threes (he had seven in the game with five landed in the final ten minutes) and Mete took his tally to 45 points with St Kent’s outscored 29-17 in the last period.

St Kent’s, after shading the first half 40-38 were very much in the hunt at the three- quarter mark trailing by a single point (63-62) with Kaslo Evans and Alex McNaught leading their effort.

Josh Child and Kaea Rangiehaeata scored early in the final frame for St Kent’s but once Ngan found his range from beyond the arc there was only one winner.

Despite double-doubles from the forward duo of Josh Leger (23 points and 12 rebounds) and Nate Wilson (20 points and 15 rebounds) Mt Albert Grammar went down 89-63 to Westlake Boys on their home court.

The pair shared 14 first quarter points but 11 in the period from Dylan Wilkie edged Westlake ahead 20-18.

On the back of his MVP performance at the U19 National Championships in Dunedin earlier in the week Sam Mennenga got to work in the second. On his way to a game high 25 points he scored 11 points in the period as Westlake moved out to a 44-32 half-time lead.

Campbell Atkinson was prominent for Westlake after half-time and although Phil Mengistie dropped a triple for MAGS they still had a lot to do at the last break trailing 71-53.

Wilkie landed his fifth trey of the game and Reuben Natusch another for good measure as Westlake eased to a fourth win of the season and equal second on the table.

Harry Smith and Richard Jiang combined for 53 points for Macleans College but a more balanced scoring effort from Liston College propelled them to a 100-80 victory.

Smith had 11 points in the opening stanza but threes from Logan Hamilton, Ben Grant, Ryan Fabian and Desmond Helu gave Liston a 25-22 lead. The scores were tied by the interval (43-43) as Tyson Kempton had the last say of the half.

Preston Karatau (25 points) made three of his five triples in the third and with Helu making useful points Liston were 68-60 to the good at three-quarter time.

Sefa Prasad scored all his 12 points in the fourth as the hosts put their foot down (winning the period 32-20) to record a valuable second win of the season.

In other news Taine Murray is currently attending the Nike Asia Camp in Shenzen, China.