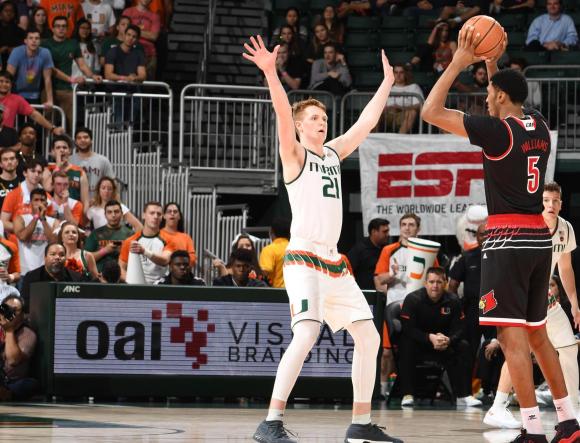 Sam Waardenburg scored an Atlantic Coast Conference career best 13 points but the University of Miami went down 78-66 against No 23 Florida State on Sunday. Sam was perfect from the floor making all four of his shots including two from beyond the arc. The Hurricanes slip to 1-6 in conference games.

Freshman Callum McRae recorded the first double-double of his college career posting 10 points and 10 rebounds as UC Riverside lost 82-64 at UC Irvine. The Highlanders are 2-4 in the Big West Conference.

St Mary’s Gaels had a couple of tough road losses going down 71-66 at BYU and 84-77 in overtime at Pepperdine. Dan Fotu had 10 points and 6 rebounds against BYU making a couple of triples in the process.

University of Washington Huskies are travelling well in the Pac-12 Conference, the Huskies unbeaten in seven games after road wins against Oregon (61-56) and Oregon State 79-69. Sam Timmins had 7 points in the first game and 2 points, 6 rebounds and 3 blocks against Oregon State.

Jack Salt claimed a team high 8 boards to accompany 7 points (3/5FG) as No 3 Virginia eased past Wake Forest 68-45 in the Atlantic Coast Conference and then accounted for the Fighting Irish at Notre Dame 82-55.