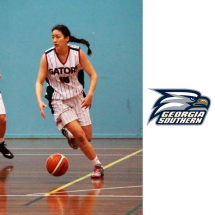 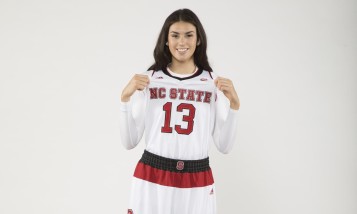 In NCAA Division I Women’s action Amy West, Tsubasa Nisbett and Esra McGoldrick were each given early Xmas presents in the last few days.

Tsubasa Nisbett was awarded her first appearance of the season by Georgia Southern University Eagles. The Eagles swooped on Coastal Georgia winning 68-46 to improve to 4-5 for the season with the Nisbett corralling a couple of rebounds to mark her debut.

Fellow Cantabrian Esra McGoldrick scored her first points in North Carolina State colours, scoring a pair of  baskets as the Wolfpack hounded Maine into submission winning 84-46. The Wolfpack are now 11-0 for the season.

Amy West also scored the first 4 points of her collegiate career for Liberty University Flames last Friday. Unfortunately the Flames were burnt by a buzzer beating three going down 66-63 against East Carolina. The Manawatu Freshman scored from two of her three scoring attempts.

The three Kiwis on the Fordham University roster were prominent as the Rams enjoyed a convincing 69-48 win against Columbia University.

Mary Goulding scored 14 points and added 4 rebounds whilst Kendell Heremaia had a trio of 4’s striking that number in points, rebounds and assists.

Akiene-Tera Reed equalled her best points haul of the season scoring 20 points (3/7FG, 14/16FT) but it wasn’t enough to prevent Virginia Commonwealth going down 54-49 against Radford. Reed also snared 6 rebounds for the Rams.

Cal State Fullerton Titans gave Amiee Book her first start of the season and the freshman guard didn’t disappoint knocking down 3 of her 5 shots from beyond the arc in a 77-65 win against Antelope Valley. That makes 19 made threes for Book from 38 shots in the first ten games of the season at a more than healthy 50%.

It took an overtime period before Northern Colorado Bears secured the win against Chattanooga but they prevailed eventually winning 68-65. Krystal leger-Walker was her usual stats stuffing self – finishing with 5 points, 5 rebounds, 6 assists and 3 steals.

One thought on “Early Xmas for Nisbett, West and McGoldrick”