Day two at the 2018 Schick Secondary Schools Nationals threw up its fair share of surprises.

In Pool C of the AA Girls Tournament Queen Margaret College remain unbeaten with a 3-0 record. Rangi Ruru got the better of Rotorua Girls 61-45 in the early game on Tuesday but then went down to St Mary’s Ponsonby 76-58. Mt Albert Grammar, despite a 68-56 loss to Queen Margaret sits second with two wins and a loss equal with Rotorua Girls High.

In Pool B St Peter’s Cambridge, winners in 2016 and 2017 have won three straight games as have Hutt Valley High.

The semi-finalists have been found in the Girls A competition with favourites Manukura and Ellesmere College progressing from Pool A. Te Aroha College join them from Pool B having defeated Stratford High (that also qualify) in the last pool game late on Tuesday. 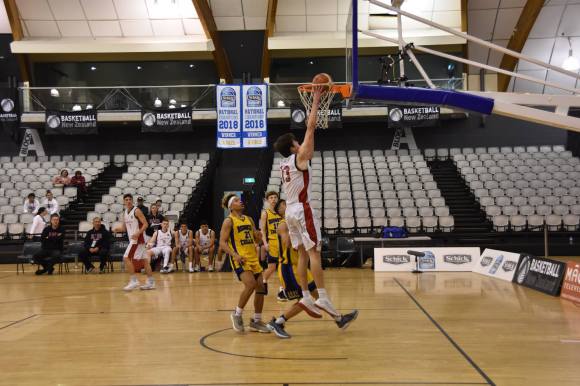 Mt Albert Grammar continued its strong showing in Pool A of the Boys AA Tournament. They have won four games straight to secure a play-off berth including a 76-69 defeat of Rongotai College. Rosmini pipped Hamilton Boys 72-69 with those two teams and Rongotai fighting for the remaining two spots in post pool play.

Cashmere High appears to be on course to sweep Pool D although with two rounds to play. However Napier Boys are lurking at 2-1 with the two to meet late on Wednesday.

With two rounds to play in Pool C each team has recorded at least one loss and no team is unbeaten – there is plenty to play for on Wednesday for all six teams. In two tight encounters Hastings Boys defeated Auckland Grammar 94-92 and in an equally tight affair Otago Boys downed Palmerston North Boys High 73-70.

In Pool B Westlake Boys and St Kentigern both have unblemished 3-0 records – the two teams clash in the final round of games on Wednesday. With two rounds to play both Rotorua Boys and St John’s, Hamilton still harbour hopes of a top three place.

In one of the best games of the day Stratford High beat Te Aroha College by the slimmest of margins 63-62 in their A Boys Pool A match up. Stratford finished the day 4-0 to book a semi-final place

In Pool B Opunake High have also claimed a semi-final slot as they also boast a 4-0 record.

The other two semi-final berths will be claimed early on Wednesday when the last round of pool games are completed.

Teams listed in order of seeding.

Boys A Tournament standings after Day 2

Girls A Tournament standings after Day 2