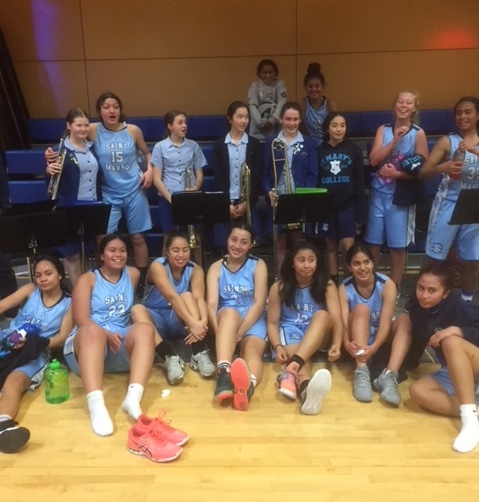 Auckland Girls Grammar School wrapped up the Auckland Secondary Schools Premier Grade regular season title with two rounds to spare on Monday. In addition Westlake Girls moved into second spot on the ladder and Rangitoto College rejuvenated their chances of a top four place. St Mary’s College proved too good for Carmel College in the fourth game played in Round 12.

Auckland Girls Grammar are on track for an unbeaten regular season campaign after easing past St Kentigern College 81-34.

Misaki Chen connected with an early three for St Kentigern but half a dozen points from Elianna Tuaiti helped AGGS to an early 21-13 lead.

A combination of defensive pressure and consistent buckets from Heeni Blakey and Tyla Tuala took Grammar further ahead – another triple from Chen helped the hosts but they trailed 42-21 at half-time.

Elianna Tuaiti continued her good work and Mele Latu chipped in with half a dozen points as the lead for the defending champions blew out to 64-25 at three-quarter time.

Courtney Griffiths scored a pair of baskets for St Kent’s in the fourth quarter but Tuala took her tally to a season best 20 points as AGGS took their record to 12-0 with two games to play in the regular season.

A season best 16 points from Gracie Hasler-Ewins and 14 points apiece from Bella Elgar and Hannah Wentworth carried Rangitoto to an important win at Massy High.

The two teams tied the opening period (15 points apiece) before Rangitoto enjoyed the better of the second period to lead 34-26 at half-time.

Hasler- Ewins and Laticia Jost were the leading scorers for each team at the break with nine points apiece.

Alyesha Schuster and Ramona Fuiavaa knocked down threes for Massey in the third frame but the visitors remained ahead (46-35) at the end of the third quarter.

Rangitoto further extended their advantage in the closing minutes – triples from Wentworth and Ella Moore plus seven points from Elgar doing the trick.

Rangitoto are now just one win behind Massey with two rounds to play in the fight for fourth spot and a semi-final berth.

Westlake Girls High beat Mt Albert Grammar 78-60 in a dress rehearsal for their upcoming semi-final. The two are locked in second spot on the ladder with 9-3 records and are certain to meet again later in the month when a place in the Premier Final will be at stake.

Piper Manolas got Westlake off to a fast start as they opened up an 18-12 lead in the first ten minutes.

Jess Moors, Emme Shearer and Rosalie Dil each knocked down triples in the second period as Westlake moved to a 40-23 advantage at the interval.

Jada Manase and Monica Kelly led the MAGS response after half-time but Westlake were still in control at three-quarter time with a 60-41 lead.

Manase and Tessa Talo-Tomokino made threes but Moors and Mareta Davidson ensured minimum damage was done to the Lake lead in the closing stages.

St Mary’s entertained Carmel with both teams having registered two wins apiece before the game. It was the hosts, perhaps spurred on by the school band playing at each interlude that made it a third win with a 74-43 victory.

The hosts pulled away to lead 47-20 at half-time as Zaaliyah Kailahi-Fulu and Riana Matiseni posted points.

Estelle Davidson and Georgia Green made scores for Carmel in the third and a better defensive effort put the brakes on the St Mary’s scoring.

However Saints pulled away again in the last quarter with Taumaia Malolo and S Te Nana-Williams scoring a brace of baskets each.