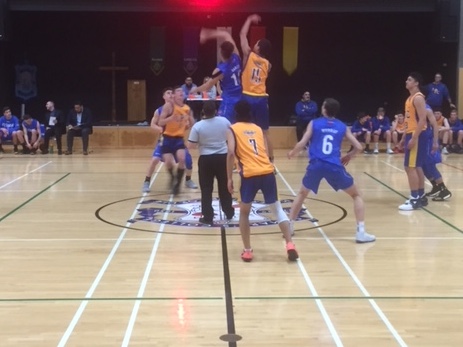 Another 40 points (41 points to be precise) from Auckland Grammar centre Anzac Rissetto, his second in four days, accounted for St Kentigern College in Round 12 of the Auckland Secondary Schools Premier competition.

With two rounds of the regular season to play the result locked Grammar into third place on the competition ladder with an 8-4 record.

In the other games played on Monday wins for Mt Albert Grammar and Rosmini College (both have 11-1 records) assured those teams of the top two places with the final standing unlikely to be decided until the final round of games on August 10th – MAGS currently hold top spot on points differential.

It was a two-point thriller when Auckland Grammar School and St Kentigern College met earlier in the season and it was another ding-dong battle at St Kent’s second time around with Rissetto proving the difference maker as the visitors won 80-76.

Levic Kerr kept the St Kent’s score ticking over in the second quarter but a three from Connor Ngan and the increasing influence of Rissetto and Ilaisa Tela gave Grammar a 46-36 half-time advantage.

St Kent’s trimmed that lead by four points in the third quarter as Shorter, Shalom Broughton and Elliot Watson brought the hosts back into contention trailing 67-61 at the third break.

“It was an exciting game and our boys did a great job fighting back in the second half, in the end it came down to a couple of plays.

“Anzac was a beast and had a huge impact on the game especially when Shalom Broughton got into early foul trouble.”

Mt Albert Grammar kept hold of their top spot on the Premier ladder after a tight 63-55 victory at Westlake Boys.

MAGS were indebted to Sataan Tawera (22 points) and Ryan Laumatia (16 points) as the pair combined for 17 points in the final quarter to seal the win.

The two teams split 24 points in the second quarter – points from Dallas Clayton handy for Westlake as they retained a two-point lead (24-22) at the break.

Kooiman, Dylan Wilkie and Jackson Port all scored from beyond the arc for Lake in the third but it was MAGS that edged ahead (41-39) through a triple from Tawera and valuable points from Theo Hurdley at the back end of the period.

It remained a dog-fight in the closing minutes but Tawera and Laumatia saw MAGS home for a tenth straight win.

Boston Schuster opened the scoring for St Peter’s College and with Jacob Errey and Whitihera Parata causing Rosmini some problems under the boards it was only a Taine Murray jump shot for Rosmini that separated the two teams at quarter time (19-17).

From there it was all downhill for the hosts with transition buckets from Joseph Hylton and Sean Murphy plus inside baskets from Mitch Dance suddenly separating the two sides (44-25).

Sam Glover scored the opening basket of the second half but buckets from Jason Mittef and Reimar Cruz ignited the Rosmini bench.

Point guard Jack Donnelly sparked the St Peter’s offence with a couple of scores but the Rozza lead had ballooned out to 84-40 at three-quarter time.

A Thomas Morgan shooting display – he made five triples – was the highlight of the fourth quarter.

Errey was outstanding in a losing cause but his points and those of his teammates had become a scarce commodity as Rosmini eased to the win that cemented them a top two spot on the table.

The Rangitoto College versus Avondale College fixture was postponed to August 6th.