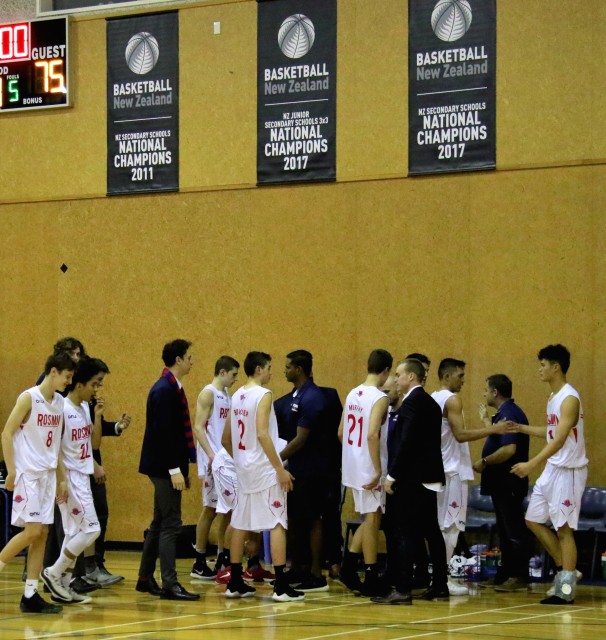 In Round Six of the Auckland Secondary Schools Premier competition there were wins for Rosmini College, Mt Albert Grammar, St Kentigern College and Westlake Boys.

A fast paced opening saw Rosmini build a position of strength by quarter time to lead 32-14 – Taine Murray 11 points in the period.

Jayden Boucher took the Rosmini lead to twenty (39-19) four minutes into the second quarter but with Teacum McCarthy providing good support to Tela, Grammar prevented the lead increasing dramatically. Kainoa Lepou converted a baseline drive to conclude the first half action with the hosts 54-31 in front.

Reihana Maxwell-Topia and Murray joined Tela and McCarthy in double figures at the break.

Marvin Williams-Dunn scored off a Joe Hylton pass to open the second half scoring, Hylton scoring himself on the next possession.

A Reimar Cruz three maintained the Rozza momentum (69-39) – another triple from Sean Murphy on the stroke of three-quarter time kept Rosmini in control, ahead 75-45.

Grammar, or to be more accurate Tela (15 points in the fourth quarter), had the better of the closing stages but Rozza’s overall domination was never threatened as they recorded a sixth straight win.

Six points apiece from Clark Aiono and Nate Wilson gave MAGS the upper hand at quarter time with a 19-12 lead.

St Peter’s replied strongly through Isaiah Franklin and Luke Buckingham in the second period and carried a narrow 31-30 lead into the half-time break.

Chayse Pinono knocked down a three early in the third quarter as MAGS steadily built an advantage to lead 50-40 with ten minutes to play.

Foul trouble, particularly to captain Whititera Parata, didn’t help the St Peter’s cause. Regular scores from MAGS guards Pinono, Sataan Tawera and Ryan Laumatia didn’t assist either as the hosts dominated proceedings in the second half.

Tom Chester made three triples in the opening frame and with Broughton and Shorter finding their way to the hoop St Kentigern led 27-22 after ten minutes.

Rangitoto guard Ethan Skelton joined in the three-point shot making fun in the second quarter but St Kent’s pulled away further as Elliot Watson and Levic Kerr made timely baskets. The hosts 55-39 to the good at half-time.

Logan McIntosh scored nine of his points in the third, a period edged by Rangi who trailed 73-61 at the last major break.

Payne and Obadaiah Paea combined for 15 points in the fourth but Zac Chan made the final seven points for St Kent’s to help them to a fourth win of the season.

Keanu Eteru, Armand Donaldson and Jaga Mete kept the score ticking over for Avondale but a three from Ethan Clark and more good work from Mennenga gave Westlake a 42-32 lead at half-time.

It was a different story in the third as a pair of threes from Preston Karatau and nine points from Mete meant it was a one point game at three-quarter time (56-55).

Donaldson led the effort in the fourth as Avondale tried desperately to gain a first win of the season but Tom Cowie, Jackson Port (two triples apiece) and Mennenga ensured a second win of the season for Lake.