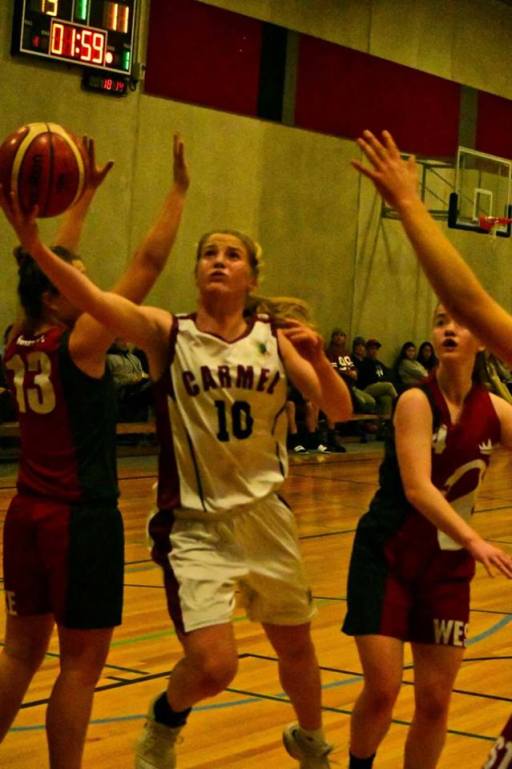 The four Auckland based players last week named in the New Zealand team to compete at the FIBA U17 World Cup next month produced fine individual performances in Round Five of the Auckland Secondary Schools Girl’s Premier competition.

Emma Hoskin opened the scoring for Carmel College in the battle of the two promoted teams but it was St Mary’s that made the better start getting out to an early 10-4 advantage, the lead 19-12 at quarter time – 9 points to Saints forward Kailahi-Fulu.

Charli Blackman and Alex Moore exchanged scores but Carmel, playing on their home court for the first time this season, were struggling to find any offensive fluency trailing 29-16 at the mid-point of the second period.

Dalton broke the Carmel scoring drought but that was cancelled out by a put back from Gracyn Tomuli-Afoa – St Mary’s handily placed at half-time with a 38-23 lead.

Moore pushed the St Mary’s lead out to twenty points (46-26) before Georgia Green replied with a pair of transition baskets courtesy of Estelle Davidson assists.

Dalton snared steals on three consecutive St Mary’s possessions but Carmel failed to make it tell on the scoreboard and trailed 55-35 at three-quarter time.

Carmel, still searching for their first win of the season, were unable to put much of a dent in the St Mary’s advantage but did enjoy seeing Jemma Cammell – a year nine guard – score her first senior baskets on debut.

After being down by just four points at quarter time (16-12), home side Rangitoto College were left to rue a poor second period after losing 80-69 to Massey High.

Bella Elgar and Hannah Wentworth led the first half effort for Rangitoto but Terina Aratangi, Shauna Povey and Aleysha Schuster led a 27 points scoring blitz by the visitors in the second period as Massey claimed a 43-25 half-time lead.

Elgar scored four straight baskets for Rangi in the third but a third triple on the night from Aratangi helped the visitors maintain a clear advantage (60-45) with ten minutes to play.

A pair of threes from Wentworth and contributions from Gracie Hasler-Ewins and Centaine Noom-Duckworth helped Rangi shade the fourth period. However with Yzabelle Taveo scoring 10 of her 17 points in the last frame Massey comfortably held on for a third win of the season.

An away win didn’t look on the cards initially as seven first quarter points from Tessa Talo-Tomokino propelled MAGS to a 15-9 first quarter advantage.

The introduction of Shearer, playing her first game of the season, made a difference as the rangy guard scored 9 points either side of the quarter time break. Westlake had much the better of the second frame – seven different scorers contributing to a 33-30 half-time lead.

Sharne Pupuke-Robati and Talo-Tomokino shared the scoring load for the hosts in the third quarter but 11 points from Shearer and scores from Rosie Dil and Piper Manolas extended the Westlake lead to 55-44 at the third break.

In the other game Auckland Grammar were slow to get going against St Kentigern leading 10-9 after the first period. From then on it was one-way traffic with AGGS winning 62-30.

There are a full round of games being played in both Premier and Senior A Divisions on Monday June 11th.