There were three Kiwi senior internationals in US college play-off action on Friday with a win and a pair of losses to report.

It was good news for Katelin Noyer. In a game that saw 13 lead changes and four ties Fresno State prevailed 53-51 as the seventh-seeded Bulldogs caused another upset. 48 hours after upsetting No 2 Wyoming on Wednesday they beat No 3 UNLV, in the semifinals of the 2017 Mountain West Women’s Basketball Championship.

Noyer, in her first season with Fresno, came off the bench to contribute 2 points and 2 rebounds. Fresno State will now prepare for the final against Boise State on Saturday.

It wasn’t such good news for the two Tall Blacks in action on Friday, both having relatively quiet games, as their two teams exited their respective conference championships. 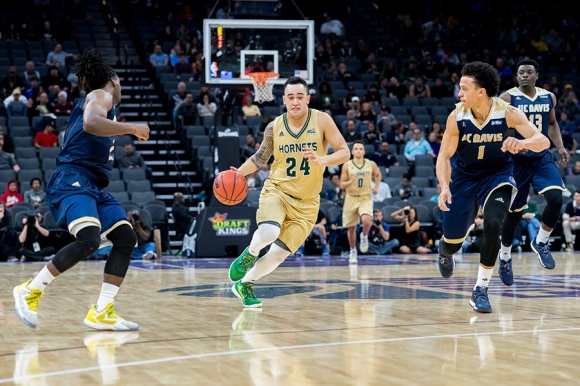 The Wellingtonian guard has had a fine first season but this wasn’t his or the Hornets day as they struggled against the more fancied (seeded No 2) Eastern Washington.

It was also a disappointing day for Jack Salt and the Virginia Cavaliers. The Cavs, ranked sixth in the Atlantic Coast Conference, were beaten by No3 Notre Dame 71-58 in a quarter-final tie in Brooklyn. The Kiwi centre didn’t score with his only shot in 11 minutes of action but did secure 4 rebounds.

It’s not all over for the Cavaliers as they will make their fourth straight NCAA Tournament appearance later in the month.