Harmon, Cocks, Palvaast, Hunter, Edmondson and Bygate all back in action overseas 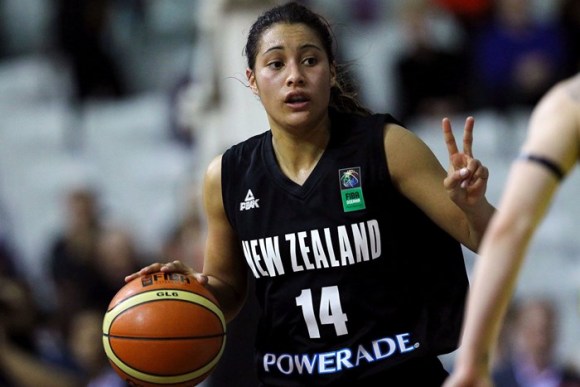 The 2016-17 Australian WNBL season began at the weekend with five Tall Ferns in action whilst in Europe Jillian Harmon is currently the lone Kiwi flag bearer.

In the WNBL guard Jordan Hunter is the only New Zealand newcomer to the competition and her debut for Adelaide Lightning was almost one to remember. The Lightning overcame a three point three-quarter time deficit to force the tie into overtime but were eventually outscored 16-2 in the extra period going down 77-63 to Bendigo Spirit on Saturday night.

Hunter logged 24 minutes and snared a game high 3 steals in her typical high-energy fashion. Alas her shooting touch deserted her on the night failing to connect with any of her five attempts.

Last season Jess Bygate was in Adelaide colours but this season she has signed with Melbourne Boomers. The former Nelson Flyers forward will be heartened by Sundays result – her Boomers were too strong for Adelaide winning 75-69 although Bygate only contributed a solitary free throw and a steal.

Hunter, in her second game of the weekend, scored a couple of points and claimed 3 rebounds for Adelaide.

Incidentally Tall Ferns assistant coach and Adelaide head coach Chris Lucas missed the double header having a prior commitment to attend the overseas wedding of his son.

The big game of the round was a match up between last season’s Grand Final protagonists Perth Lynx and Townsville Fire in Townsville.

Townsville, winners of the WNBL for the past two seasons showed that they are still the team to beat. After an even opening quarter they dominated the middle proceedings forging a 68-48 three-quarter time lead before closing out an 84-62 win.

Toni Edmondson scored 7 points and added 4 rebounds and a steal for Perth. It wasn’t all bad news for Perth as they had opened their campaign with a 93-90 victory at Sydney University Flames on Friday night. In that one the Cantabrian swingman had 4pts/4rebs/5assists/1steal.

Jillian Harmon has returned to Le Mura Lucca in the Italian League for a second season. Last week she continued where she had left off at the FIBA Olympic Qualifying Tournament in France – who could forget her herculean performance back in June when she recorded 25 points (9/17FG) and 14 rebounds as the Tall Ferns went down to Cuba.

In the opening game of the season Lucca proved too strong for Vigarano winning 65-48 with the Tall Fern forward scoring a game high 19 points and adding a pair of steals and 3 rebounds.