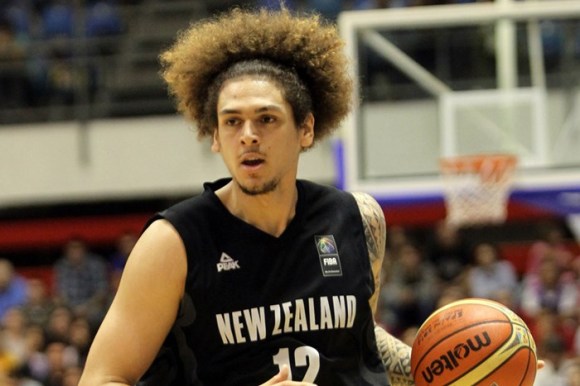 Over in Europe there are just two players flying the flag for New Zealand and both are playing in Spain. Isaac Fotu is back for a second season at Zaragoza and Mike Karena is suiting up for Sammic ISB in the Spanish second tier competition.

Fotu and Zaragoza had a double header over the weekend. On Sunday, despite a team high 22 points (8/12FG) and 7 rebounds from the Tall Blacks forward Zaragoza suffered a second consecutive home defeat going down 75-69 to Bilbao.

48 hours earlier Fotu had 16 points and 8 rebounds in Zaragoza’s 80-71 victory at Unicaja. He slotted home all 7 of his free throws to go along with 3 from 7 from the field.

Zaragoza are now 1-2 this season

Karena helped his club Sammic to a 2-0 start to the season as they beat Tarragona 63-60 in overtime. Karena secured 6 rebounds to go with 6 points in the W.

In Australia it was partially a round of inactivity for the Kiwi’s in the opening round of the NBL season.

Reuben Te Rangi missed Brisbane Bullets outstanding start to the season due to injury. The Bullets, under former Breakers coach Andrej Lemanis, are 2-0 and top of the table after toppling defending champs Perth Wildcats at home on Thursday and Sydney Kings on Saturday.

Dion Prewster was also confined to bench warming duties by the Kings.

I need to give a shout out to Rosmini College old boy Tohi Smith-Milner. In his second season as a Development Player at Melbourne United Smith-Milne logged 5 minutes on Sunday as Melbourne stuttered to a second successive defeat going down 89-79 at home against Adelaide. The power forward notched a solitary rebound in that time but just getting on court in such a star-studded lineup is a notable achievement.

One man who did see plenty of action was Jarrod Kenny. The Perth Wildcats guard is back to full fitness after a shoulder injury kept him out of the Tall Blacks campaign earlier in the year. Kenny had 5 points and 3 assists in the loss in Brisbane on Thursday and a couple of points, 3 rebounds and 2 assists as Perth escaped from the clutches of a second defeat with an overtime victory against Cairns Taipans 48 hours later in Perth.

Over 12,000 fans packed Perth Arena to see the Wildcats tie the game with 0.8 seconds remaining before dominating the extra period to win 84-74.