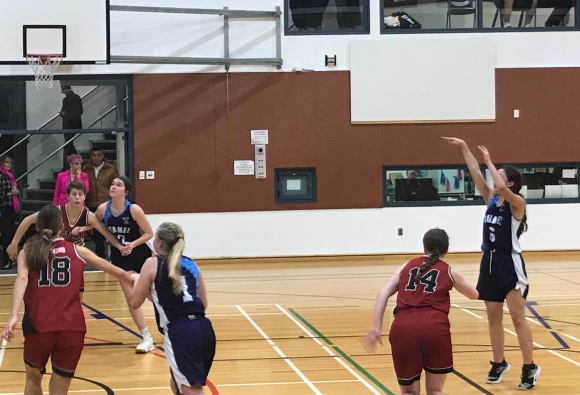 Westlake Girls High and St Mary’s College remain unbeaten in the Auckland Schools Premier Competition. Both have a 5-0 record and with it a place at Secondary School Nationals guaranteed. The other three spots at Nationals will come from the quartet of Baradene College, Epsom Girls Grammar, Rangitoto College and Massey High.

A disappointing week for Carmel College finished with Westlake demolishing the hosts 132-22.

Jemma Cammell worked tirelessly scoring ten points as well as having to undertake the ball handling duties but her team were overwhelmed on the night.

Once again St Mary’s College were pushed all the way before securing the win. Two weeks after beating Massey High by one point they repeated the feat, this time at the expense of Baradene College winning 70-69.

The scores were all tied at 15 points apiece at quarter time and still even (30-30) at half-time.

Baradene had much the better of the third quarter as Deyna Topia, Ritorya Tamilo and Charlotte Rattray helped them pile on 29 points to lead 59-52 at the end of the period.

Safena Tenana-Williams and Zaaliyah Kailahi-Fulu led the St Mary’s fightback in the fourth. Tamilo did her best to keep the Baradene score moving but they were eventually run down by the defending champions – Kat Leslie and Poppy Cavanagh-Briggs making the telling scores at the death.

In another close encounter Epsom Girls Grammar had just enough in the tank to hold off Rangitoto College to win 80-76.

Rangitoto actually led by three (55-52) at three-quarter time but a couple of threes from Maya Fowler and a bunch of points from Flo Dallow propelled Epsom into the lead  in the fourth.

Ella Moore made four triples (7 made threes in the game) in the final period, Centaine Noom-Duckworth and Waiaria Riley also weighed in with points in an arm wrestle that was eventually claimed by Epsom.

Sarah Joy Aruwa was in double figures by quarter time with Epsom ahead 15-12 at the quarter break.

Waiaria Riley, on her way to a game high 29 points, scored a dozen of those in the second to help Rangi to a narrow 36-35 half-time lead.

Aruwa and Fowler paced the Epsom effort in the third but with Moore finding her range and Waiaria in fine form Rangi were still ahead at the end of the third.

In a tense last quarter Epsom held their nerve to move into the top four and keep their hopes of a spot at Nationals alive.

Massey High kept their hopes of a top five finish intact with a deserved 85-63 win against Mt Albert Grammar.

21 points from Ramona Fuaivaa paced the Massey effort and there were other telling contributions from Shazaleah Henry (18 points), Maya Taingahue (17 points) and Tahliya Waikiki (15 points).

MAGS were still in contention at three-quarter time trailing 61-48 but a scoring blitz in the fourth from the hosts did the trick.

Henry knocked down a couple of threes, Waiikiki added another and with Zhoey Tilby-Woods weighing in with 6 points as Massey won the fourth frame 24-15.

Things went well for MAGS early on as 8 points from Kayla Tenana meant they trailed by just two points (20-18) at the quarter mark.

Massey extended their lead to 41-30 at half-time but MAGS fought back in the third. Tenana, Shekinah Kuresa and Monica Kelly made a pair of baskets apiece to keep the visitors in touch with ten minutes to play.

From there Massey took charge of proceedings to recorded win number two for the season.