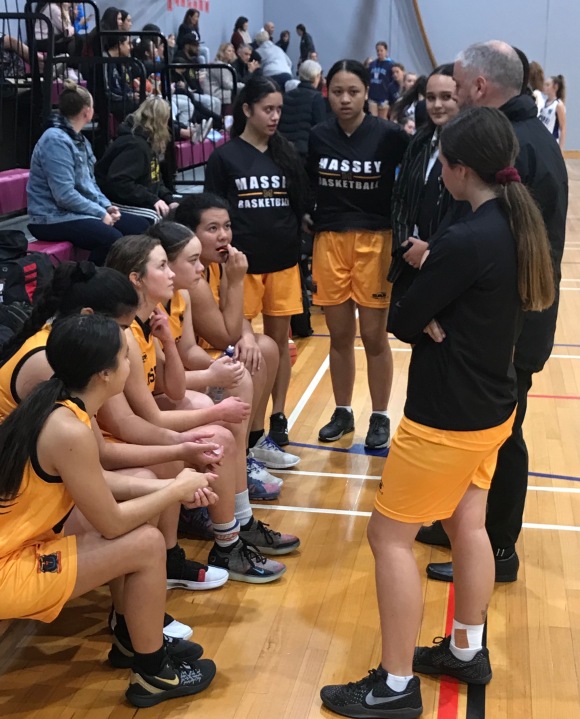 St Mary’s College and Westlake Girls High remain unbeaten in the Auckland Secondary Schools Premier Division but the pair had contrasting victories in retaining their 100% records.

Westlake cruised home against Mt Albert Grammar whilst St Mary’s can count themselves rather fortunate to snatch a win against Massey High.

There were also victories for Rangitoto College and Baradene College.

“We might not get a better chance,” were the words of Massey High School Head Coach Tim Ryan after his team were pipped at the post by St Mary’s.

Massey led almost the entire game and were up by as many as 16 points at one stage but suffered the agony of seeing there lead initially diminish and ultimately snatched away as Jess Fleming and Safena Tenana-Williams made the game tying then go-ahead scores for St Mary’s.

The next period was all Massey as they peeled off 20 points – Shazaleah Henry knocked down a three but the majority of damage was done by Ramona Fuaivaa and Maya Taingahue – to lead 36-22 half-time.

Lani Robertson led a St Mary’s revival in the third frame but they still had plenty to do at three-quarter time trailing 49-42.

Zhoey Tilby-Woods and Taingahue made buckets but Massey scores were starting to dry up. St Mary’s were hardly in free scoring mode themselves but after Ualika and Fleming baskets they sensed an opportunity.

Fuaivaa made important free-throws but it wasn’t quite enough as the Tenana-Wiliams sisters and Jess Fleming made crucial scores to pinch the win.

It was a different story at Westlake as the other team boasting an unblemished record pummelled Mt Albert Grammar School 96-44.

The game started poorly for MAGS as they trailed 18-6 after the first quarter.

Shazaleah Henry scored six points for MAGS in the second quarter but Jess Moors, Pugh and Dil bettered that to carry Westlake to a 46-19 lead at half-time.

It was more of the same in the second half as Westlake moved to a third straight win and MAGS slipped to a third consecutive defeat.

Despite getting in some early foul trouble Florence Dallow (20 points) still top scored for Epsom Girls Grammar. However in a game featuring a number of momentum swings it was Baradene, paced by 22 points from Lilly Parke, that secured a 70-60 win.

Baradene enjoyed the better of the opening quarter (19-15) but by the interval their lead was just a single point (33-32).

A three from Maya Fowler and ten points from Dallow gave Epsom the lead but Poppy Cavanagh-Briggs made a couple of key plays late in the third and with ten minutes to play the scores were tied at 47 points apiece.

Lauren Boxall-Hunt made a couple of handy scores for Epsom but the last and most vital momentum swing went the way of Baradene. Parke made nine points in the closing minutes, Ritorya Tamilo made a couple of vital scores with Deyna Topia icing the game from the free-throw line to move Baradene to 2-1 for the season.

A 19-point win slightly flattered Rangitoto College as with 4 minutes to play Carmel College trailed by just 7 points (62-55). Kellie Tawhiao paced proceedings for Rangi with a dominating 23 points and 17 rebounds

Izzy MacGregor and Jemma Cammell gave Carmel a 7-0 start but Waiaria Riley got Rangitoto going and it was just a one point game at quarter time (14-13) in favour of hosts Carmel.

Tawhiao and Centaine Noon-Duckworth powered Rangi to a 34-23 lead but with Katie Linstrom and Kalea Norton making threes Carmel closed the half with an 11-2 run to trail 36-34 at the break.

It was all Rangi in the third quarter as they restricted Carmel to a measly 4 points – threes from Zaara Sain and Tawhiao helped them to a 52-38 lead.

Carmel worked hard to reduce the lead but still trailed by ten points with 5 minutes to play.

Cammell reduced the deficit to seven with 3:45 to play but from there Rangi ensured they would claim the win by scoring 16 of the final 20 points – a three at the death from Ella Moore putting an exclamation mark on the victory.