The Westlake Boys versus St Kentigern College game is being played at Trusts Stadium, Waitakere on Saturday, tip-off 2.15pm.

In an encounter that looked as if it would go down to the wire Rosmini College kept Auckland Grammar scoreless for five-minutes in the fourth quarter enabling them to pull away for a decisive 86-66 victory.

Early on it was all AGS as they attacked the boards with glee, troubled Rosmini with their transition play and penetrative driving.

Threes from Cian Emery and Pita Maxwell-Topia quickly erased the deficit, Toby Caldwell struck from deep for AGS but it was a quarter that belonged to Rosmini as they led 45-35 at half-time.

Taine Murray had been well marshalled by the home defence but he peeled off three straight baskets to keep Rosmini ahead. However AGS’ enthusiasm on the offensive boards was paying dividends, the work of Christian Ward, Oliver Gibson and Luka Vea earning Grammar extra possessions and reward on the scoreboard – Rosmini’s lead a narrow 61-56 with ten minutes remaining.

That lead was down to three when Vea opened the fourth quarter. Sean Murphy scored six straight points for the visitors but Gibson and Jamal Todd countered for the hosts and with 5:30 to play the Rosmini lead was still five points (68-63).

From there it was all Rosmini – some starch was applied to their defence and at the offensive end Murray, Emery, Murphy and Maxwell-Topia prospered. Maxwell-Topia’s fourth three of the game meant Rosmini had strung together a 15-0 run. It was a run that stretched the score line to a margin that didn’t reflect the Grammar effort but it was one that did please the many former Rosmini senior players in the good sized crowd. 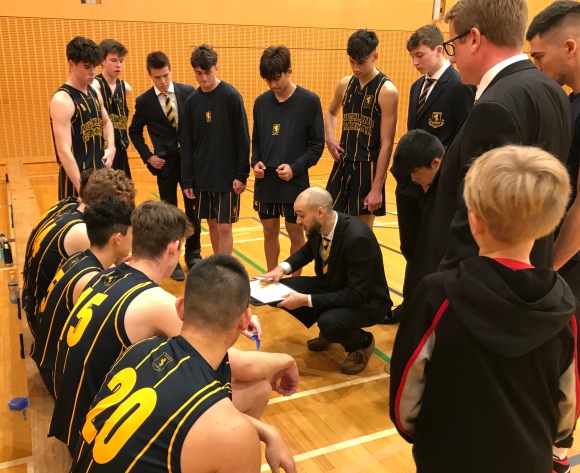 A third quarter dominated by home side Mt Albert Grammar School appeared to give them a springboard to topple Rangitoto College on Friday. However the experience pair of Zach Riley and Ethan Skelton scored 10 points apiece in the final quarter as Rangitoto composed themselves to overcome a six-point deficit and win an entertaining contest 73-66.

An even first quarter was shaded by Rangitoto 16-14 before the second period became a grind. That was particularly so for hosts MAGS who managed just one field goal in the quarter, courtesy of Phoenix Sorensen, to trail 27-20 after a low scoring first half. David Jovanovic had 6 points at the break for Rangi, Ben Skelton 5 points for MAGS.

The second quarter scoring famine was replaced with a feast in the third – MAGS consuming the greater portions. Tucking in the most was Dakota Stephens (three triples) with Sataan Tawera and Morgan Aiono also grabbing healthy portions.Riley didn’t leave the table empty handed – his 11 points keeping the visitors in touch, down 49-43 at three-quarter time.

The intensity went up a notch in the fourth and again MAGS found their scoring touch elusive. Stephens scored his fourth triple of the night but it was Rangi gaining momentum.

Lucas Payne scored from beyond the arc and when Riley did the same on two occasions the visitors had wrestled the lead.

Tawera and Sorensen fired a couple of late shots but it was Skelton and Kaia Dryden putting the finishing touches to a hard fought victory for the defending champions.

Liston College have made a good start to the season. After comfortably disposing of Long Bay College in the promotion/relegation tie last week they travelled to St Peter’s College and came away with a 90-76 win on Friday night.

They made a solid start winning a quiet opening quarter 12-9 then stretching that advantage to 36-27 by half-time.

Centre Troy Lee Baker did most of the damage, dominating inside with 18 first half points. Jack Donnelly was in good form for St Peter’s and he came close to matching Baker, notching 15 points before the interval.

Donnelly continued to shine for St Peters, as did Mitch Lancaster. The pair tallied 18 points between them in the third period but it wasn’t enough to prevent Liston pulling further ahead.

Safa Prasad enjoyed a 14 points haul in ten minutes and with James Hickey and Desmond Helu in good form the Liston advantage was 68-54 at the three-quarter mark.

The two teams exchanged baskets in the fourth, St Peter’s unable to threaten the visitors lead.