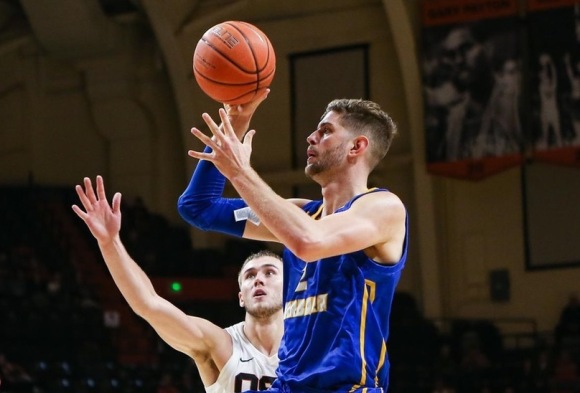 Another week, another bunch of good performances from Kiwi men playing NCAA Division I basketball. The Team of the Week is led by Matt Freeman who enjoyed a career  night for the University of California Santa Barbara.

“I just did what I do in practice and hit open shots,” Matt Freeman said after his scintillating shooting in the Gauchos 87-62 win against Long Beach State. Freeman nailed 6 from 7 three-point shots on his way to a career best 24 points.

“It’s about sticking to it, not losing belief in each other, trusting each other. Like coach says, we have such a talented team, don’t lose it just because we lost a couple of games. We’ve got it all there.”

The Gauchos had lost four of its last five games but with two home games later this week will be hoping to improve their 3-4 record in Big West Conference play.

On the night San Diego State retired Kawhi Leonard’s number 15 jersey the #4 ranked Aztecs took their unbeaten record to 23-0 with an 80-68 come from behind victory against Utah State.

Yanni Wetzell played his part in the celebratory night with a double-double of 11 points (4/8 FG, 2/2FT), 10 rebounds (six offensive boards), 2 steals and a block.

A team high 5 assists to go with 10 points and 3 rebounds from Izayah Le’afa was not enough to get the Hornets past conference leaders East Washington. Sacramento State are 4-6 in Big Sky Conference games.

St Marys Gaels beat Portland 86-64 with Dan Fotu putting together a tidy 9 points, 3 rebounds, 2 assists and a block for the Gaels. On the other side of the court Taki Fahrensohn had 7 points, 3 rebounds and an assist for Portland.

48 hours later St Mary’s were outscored 6-0 down the stretch at BYU losing 81-79. Fotu scored 10 points – the loss meaning the Gaels are 6-3 in the West Coast Conference.

Angus McWilliam keeps getting it done for University of California Riverside. He was one rebound shy of a double-double  finishing with 11 points and 9 rebounds in the recent 77-69 home win against Long Beach State. He is second on the Riverside scoring and rebounding lists averaging 8.8 points and 6.0 rebounds per game.

The other half of the Riverside “Mack Attack” Callum McRae finished with 6 points, 6 rebounds and a couple of steals in the Highlanders win against Long Beach State.

Following his 7 points against St Mary’s Taki Fahrensohn went a point better with 8 in the Portland Pilots 85-61 loss to Santa Clara.

Miami University went down 62-57 at Pitt to slip to 3-8 in the Atlantic Coast Conference. Sam Waardenburg finished with 5 points, 5 rebounds and a couple of assists.

Jackson Stent put the seal on Houston Baptist Huskies 82-77 win against Texas A&M-Corpus Christie. The Cantabrian blocked a shot and drew a charge with seven seconds to play and then converted one of two free-throws. It was just the second Southland Conference win for the Huskies.