Kiwi Men – NCAA Div I Team of the Week

The latest Kiwi Team of the Week in NCAA Division I men’s basketball features a player who had career best shooting night, one with a career high rebounding count, a season high points haul for another, a former Tall Black with +26 in the +/- column and a first three-point shot attempted and scored in three years from another former Tall Black! 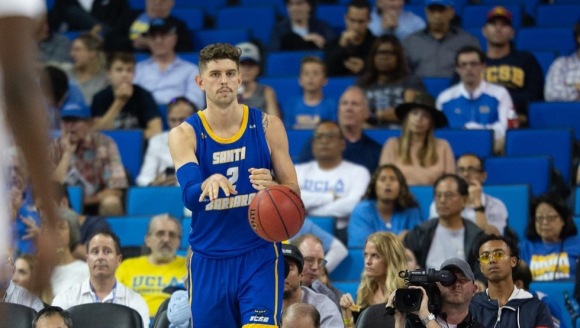 “I consider myself one of the team leaders and to be that, I need to make free throws down the stretch. Tonight I did and this was a big win for us,” reflected Matt Freeman after he had made four free-throws in the final 8 seconds to guide UC Santa Barbara to a 64-60 win at Cal State Bakersfield.

Freeman finished with a career high 19 points on 4 from 5 shooting from beyond the three point arc and 7 from 7 free-throws.

Sam Waardenburg had a good night as Miami University secured an impressive 81-79 victory at Illinois in the Big Ten/ACC Challenge. The former Rangitoto College standout added a season high 12 points to 8 rebounds in 34 minutes of playing time. Waardenburg was an efficient 4 from 7 from the field including 2 from 4 from beyond the arc.

Izayah Le’afa was a massive +27 in plus/minus as Sacramento State eclipsed UC Merced 72-36. The former Tall Blacks point guard finished with 8 points (2/4 3PG) and 6 rebounds as the Hornets improved to 5-1.

It’s been a good week for Angus McWilliam. In his first start of the season he went close to a double-double with 10 points and a career high 9 rebounds in the 74-40 win against Cal Lutheran.

A couple of days earlier Riverside slipped up against Cal Baptist going down 79-67 but McWilliam still managed 8 rebounds and 6 points in the loss.

Washington improved to 7-1 with a 90-80 victory against Eastern Washington. Sam Timmins secured 6 rebounds and scored 11 points (4/6FG) which included his first three-point shot attempted – and made – since his freshman year in 2016-17! The former Otago Boys big man added a block for good measure.

Jackson Stent was a major contributor for Houston Baptist with 12 points (6/8FG) and 4 assists but the Huskies fell 113-90 to Stamford and remain winless after seven games.

In a very one-sided affair Abilene Christian overwhelmed Dallas Christian 102-43. Tobias Cameron grabbed the opportunity of some additional court time with 7 points and 4 rebounds for Abilene.

San Diego State remained unbeaten when a three on the buzzer propelled them to a 59-57 win against San Jose State. Yanni Wetzell scored 8 points for the 10-0 Aztecs.