Despite missing the last couple of games due to illness Amiee Book still makes the NCAA Kiwi Women’s Team of the Month for November. She is joined by Kendell Heremaia, Shalae Salmon and a couple of Tall Ferns, Akiene-Tera Reed and Zoe Richards.

The 2018 Big West Conference Sixth Player of the Year has missed three of Cal State Fullerton’s early season games but when she has been on deck she has averaged 14 points per game. The former Waimea College guard scored a career high 27 points against both Southern Utah and Loyola Marymount and is shooting 44% (16/36) from beyond the arc.

A co-captain at Fordham University Kendell Heremaia is certainly leading by example. The former St Peter’s School, Cambridge and Waikato standout is leading the Rams in rebounds (8.0rpg) and is also averaging 11.9 points and 2.9 assists per game. Her shooting numbers are good at 86% (12/14) from the foul line and 42% (17/41) from deep. She matched her career high of 19 points in Fordham’s latest win against Lehigh.

An All-Atlantic 10 First Team selection last year the 2018 Tall Fern has missed three games due a hand injury. Akiene-Tera Reed has still averaged 11.8 points and 3.4 rebounds per game for Virginia Commonwealth Rams. Reed is shooting a remarkable 71% from beyond the three-point arc although admittedly it is a small sample size – 5 from 7 attempts. 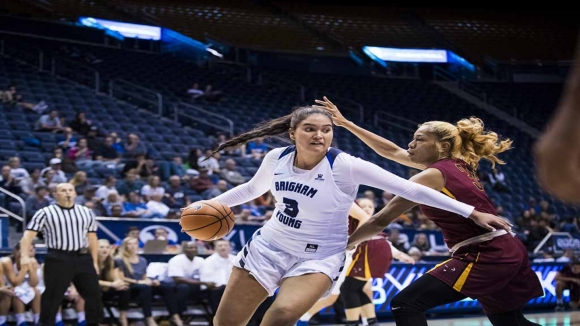 Shalae Salmon made it consecutive double-doubles with 10 points and 11 rebounds (5 offensive boards) for BYU in their 67-50 triumph against Utah State. The game was played in front of 5,800 fans at the Marriott Centre, the second largest crowd in programme history.

The Wellington Girls College alumni is averaging 8.2 points and is second on the team in rebounding with 7.2rpg for the Cougars.

The Otago Gold Rush forward is averaging 13.3 points and 4.5 rebounds for Eckerd College having scored in double figures in all four games the Tritons have played this season. Showing the type of form that earned her Tall Ferns selection this year Richards scored a season high 18 points (9/11FG) against Georgia Southwestern recently.

Charlotte Whittaker has had a growing presence in her first season at Colorado. The Cantabrian has just had three straight games in double for the unbeaten Buffaloes (6-0).

She has a season best 15 points and is averaging 8.3 points and 3.0 rebounds per game.

Michelle Nicholls is in her first season at Purdue Fort Wayne having transferred to the Mastodons after two years at La Salle. Scored a season high 18 points against UIC and is averaging 7.6 points and 3.8 rebounds per game.

McKenna Dale missed all of last season at  Brown University due to injury. The former Junior Tall Fern is averaging 6.5 points and 3.8 rebounds since her return for the 3-5 Bears.

Eva Langton averaged 6.6 points and 4.0 rebounds for Texas A&M International. The Taranaki guard has attempted ten three-point shots and made six (60%) in her seven games for the Dustdevils in November.