The Boys Final was dominated by four players that between them amassed 124 points.

Ezekiel Priest and Dontae Nance amassed 34 points apiece for Rangitoto while for Grammar Blake Manning  scored 30 points and Josh Muggleston was not far behind with 26 points.

Nance knocked down a couple of threes in the first quarter but Muggleston bettered that by making three from beyond the arc as Grammar trailed 23-20 at the quarter mark.

A low scoring second spell ensued – Rangi ahead 37-32 at half-time.

Nance and Priest scored all but two of Rangi’s 22 points in the third but with Manning peeling off 16 straight points for AGS his team were only three points down a three-quarter time (59-56).

Rangi got the jump early on in the fourth to hold off a spirited Grammar effort. 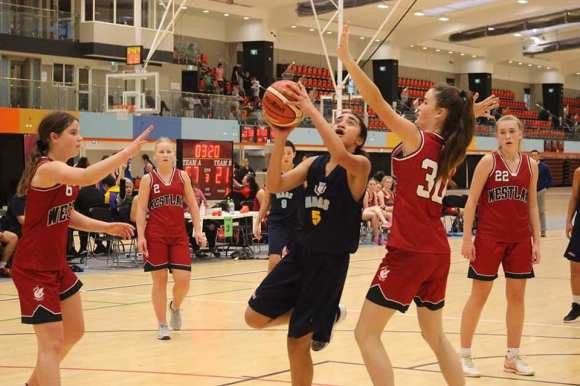 Seven games in four games took its toll on Mt Albert Grammar who came off second best in the girls final despite Danae Tait scoring 19 points.

Westlake took advantage of its enviable depth racing to a 21-10 first quarter lead and cruised to victory thereafter.

Led by Mackenzie Chatfield’s 16 points Lake had seven players contributing 8 points or more as they eased to an 88-41 victory.