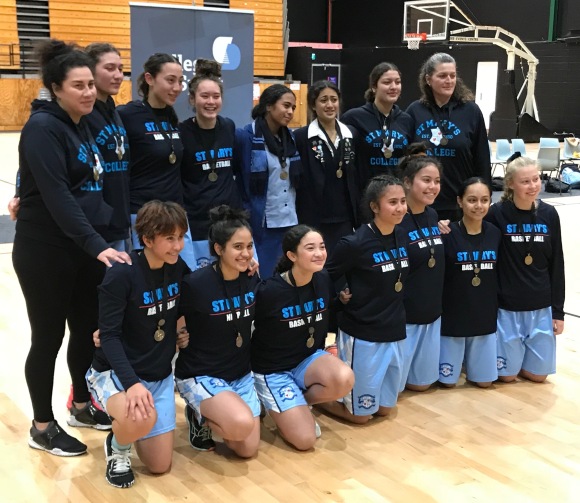 St Mary’s maintained their unbeaten record but Westlake, missing three players away on international duty and two others with injury, gave the regular season champions a thorough examination.

In fact with five minutes to play Westlake only trailed by three points (71-68) and an upset looked a possibility.

It was then that St Mary’s turned to their senior payer Jazz Kailahi-Fulu and the Junior Tall Fern forward didn’t disappoint. She scored eight points down the stretch and with Kat Leslie and Alex Moore also making valuable contributions Westlake were outscored 12-6 in the closing minutes.

Earlier, a free flowing game had been a battle of the guards with the Te Nana-Williams sisters Leata and Safena outstanding for St Mary’s – Holly Williams Amiya Fotu and Tabatha Leyson leading the Westlake response.

St Mary’s won the opening period 18-15 with Safena and Leata both landing from beyond the arc.

Emma Pugh scored inside and Leyson dropped a pair of threes as Westlake went toe to toe with their opponents.

Safena and Leata were well into double figures by half-time but a reverse layup from Holly Williams on the final play of the half meant Westlake were within a point at the interval trailing 40-39.

St Mary’s made a critical run to open the second half outscoring Westlake 13-3. Sophie Dil landed a three but a banked triple from Safena plus a purer effort from the corner kept St Mary’s ahead by double digits.

A couple of Makenzee Boucher transition baskets aided the Westlake cause as did a nice finish by Amiya Fotu – St Mary’s ahead 65-56 at three-quarter time.

Emma Pugh and Sarah Moors helped Westlake narrow the gap in the early stages of the fourth but Kailahi-Fulu upped the intensity in the closing five minutes to wrestle back the initiative and make it 14 wins on the bounce for St Mary’s.