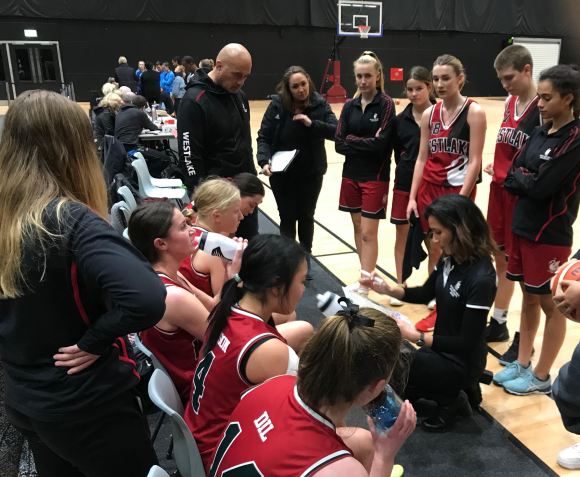 Three rather one-sided games were the feature in Round 13 of the Auckland Secondary Schools Girl’s Premier League last Friday.

Rangitoto College raced to a commanding first half lead at home to Massey High School and never looked back from there winning 107-74.

11 points from Hannah Wentworth and 8 from Aroha Riley helped Rangitoto to pile on 38 points to lead by 19 points at quarter time.

Tahlyah Waikiki was in double figures for Massey by half-time but with Wentworth, Waiaaria Riley, Moneesha Barrett and Ella Moore raining in threes Rangi had a huge 68-31 lead at half-time.

Massey made major improvements in the second half with Ramona Fuaivaa, Shazaleah Henry and Maya Taingahue joining Waikki in double figures. Massey shaded the second half 43-39 but the damage had already been done as Rangitoto moved up to third spot on the ladder.

Auckland Grammar only scored two points in the opening quarter but had 17 points by half-time to trail St Mary’s 46-14 at half-time.

Credit must go to Imogene Noble and Leah Patuwairua who between them scored all but one of the AGGS points as they were eventually beaten 98-29.

All 12 St Mary’s players got on the scoresheet led by Zaaliyah Kailahi-Fulu, Trinity Atiga and Maia Malolo.

St Mary’s will likely play Massey High in the semi-finals in a couple of weeks’ time.

Carmel College concluded their 2019 Prems campaign at Eventfinda Stadium going down 110-65 to Westlake.

Tayla Dalton, at her dynamic best, amassed 48 points but other than 8 points from Qaizdon ‘Q’ Stephano had little scoring support as Westlake won at a canter after opening up a 30-15 first period lead.

Jordyn Maddix, Emma Pugh and Rosie Dil led the Westlake scoring as they now prepare for their final regular season game against Rangitoto on Friday. Interestingly this may well serve as an entrée for a likely semi-final encounter the following week.

For Carmel, they get an extra couple of weeks to prepare for Schick Nationals Qualifiers later in the month.