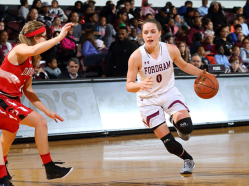 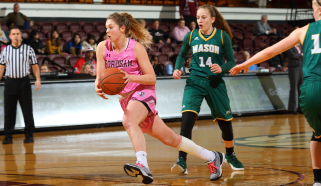 Four Kiwi women are on history making teams as Virginia Commonwealth University and Fordham University jointly claimed the Atlantic 10 Conference regular season title on Saturday. Both teams finished with an identical 13-3 record and, perhaps in another A-10 first, both carry the moniker of the ‘Rams’.

For the Rams of VCU, led by sophmore Akiene-Tera Reed, it is their best conference finish in history topping its second place in 2009.

Reed has led the VCU scoring this campaign, as she did last year, averaging 12.3 points per game. Once again on Saturday she led the Rams with 12 points as they won 61-54 against Davidson University.

Reed made 10 of her dozen points at the foul line where she shot 100% making all ten of her attempts in addition to making one from 3 from the field.

Reed has been terrific from the free throw line all season knocking down 102 from 124 attempts at 82.3%, testimony to her consistency at the line and ability to attack the rim.

It was also a first conference topping performance by the Rams from the Bronx as they came home on a wet sail winning nine games on the trot culminating with a 51-41 win at St Joseph’s University.

Senior forward Mary Goulding has been dynamic for Fordham all season sitting third on the A-10 rebounding list with 8.4 boards per game. The Cantabrian exceeded that output on Saturday claiming a game high 13 rebounds whilst also netting 16 points (7/10FG) – her ninth double-double of the season.

Waikato’s Kendell Heremaia accumulated 4 points, 3 rebounds, 2 steals and a pair of assists in 36 minutes whilst sixth-man Zara Jillings collected a free-throw and a rebound in 16 minutes of play.

There is not much time to celebrate as the 14 team Conference Tournament begins in Pittsburgh at Duquesne University on Tuesday.  Both teams have earned a bye in the first round, entering at the quarter-final stage next Thursday.

Can either team go on and claim the Atlantic 10 Tournament title and with it automatic entry to the NCAA Tournament? The Final is set down for Sunday March 10th– a Rams v Rams match up would be perfect.