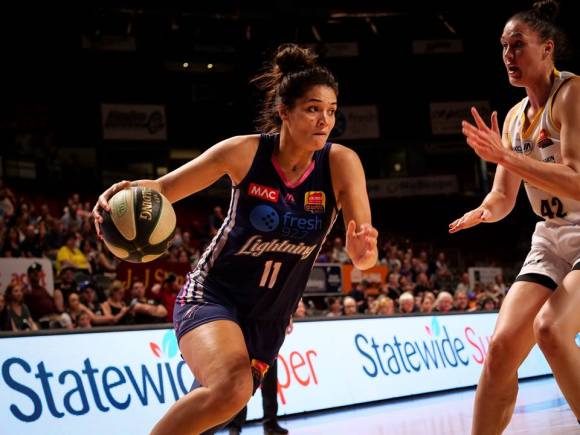 The Australian Women’s National Basketball League (WNBL) Grand Final Series is headed to a deciding game in Canberra on Saturday evening after a pulsating second game was won by Adelaide Lightning last night.

Canberra had comfortably won the opening game 88-67 on its home court but the Lightning bounced back in stirring fashion closing out a nail-biter 74-73. Nicole Seekamp scored with a buzzer beater in front of 3,700 ecstatic fans at the Titanium Security Arena in Adelaide to force a deciding game in the best-of-three series.

Tall Fern Penina Davidson, in her first season as a professional since graduating from the University of California Berkeley in 2018, produced a nice cameo off the bench posting 4 points, 4 rebounds, 2 steals and a block.

The winning basket wasn’t without controversy as the referees missed a clear double dribble as the ball was dribbled up court and there was grave doubt as to whether Seekamp got off her winning shot before the final siren sounded.

Earlier Canberra had forged a 44-37 half-time advantage although that lead has virtually evaporated by three-quarter time with Adelaide trailing by just one point (56-55). Even though Canberra led for the majority of the final period Adelaide were never more than two possessions in arrears and timed their final run to perfection.

Adelaide Head Coach and former Tall Ferns assistant Chris Lucas described the game as “An amazing game of women’s basketball. I thought it was just fantastic, it had everything.”

Whatever the outcome on Saturday Davidson has relished her rookie season in Adelaide.

“Making the Grand Final has definitely been a highlight and I couldn’t have asked for much more from my first professional contract,” she said.