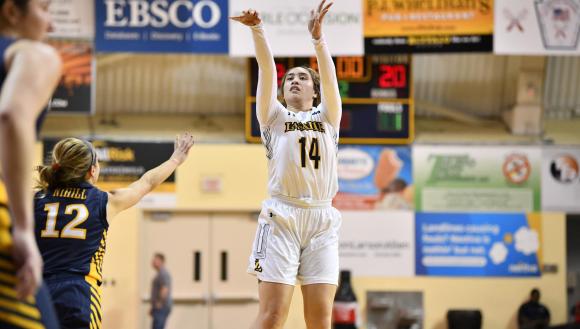 Michelle Nicholls and Akiene-Tera Reed were teammates at Life Centre Academy, New Jersey during their final two years of high school. Both secured NCAA Division 1 scholarships following their time at LCA with Reed grabbing most the headlines for her scoring feats at Virginia Commonwealth University over the last season and a half. However, it was Nicholls turn to shine at the weekend as her all-round performance carried La Salle University Explorers to their first win of the season.

Nicholls had to bide her time last year getting little opportunity during her freshman season. However playing time has increased this season and the additional playing experience helped her put together an outstanding stats line to help La Salle claim that first win after eight straight losses. Nicholls scored a career high 17 points to accompany 4 assists, 3 rebounds and 3 steals in 30 minutes of action as the Explorers beat Norfolk State 76-65.

Reed produced an efficient shooting display (5/8FG, 6/6FT) but her 16 points were not enough to get VCU Rams across the line at Cincinnati going down 66-54 – the Rams still boast a 6-4 record ahead of a week off.

In other news from NCAA Division 1 hoops 13 points (3/5 3PG) from guard Kayla Manirirangi helped Tulane University Green Wave make it seven wins from the first eight games with a 71-46 win over Nicholls University.

The win was a remarkable 500thfor Tulane Head Coach Lisa Stockton in her 25thseason leading Tulane.

Mary Goulding threatened a double-double in the Fordham University Rams 65-52 loss at Pittsburgh. In addition to 8 points Goulding secured 9 rebounds (4 at the offensive end) and distributed a game high 5 assists. Kendell Heremaia chipped in with 9 points– the Rams now 5-5 for the season.

Amiee Book set new college highs in steals and rebounds as Cal State Fullerton Titans came away from a trip across country to New York with a 61-58 victory over Columbia. Book snared a game high 5 steals, to go with 7 boards and 7 points.

Tegan Graham scored 6 points as Colgate University Raiders stole a 61-52 road win against University of Massachusetts Lowell to improve to 4-4 for the season. The Wellingtonian hit 2 from 5 threes.

Also scoring half a dozen but in a losing cause was Shalae Salmon as BYU were defeated 78-67 by Utah.