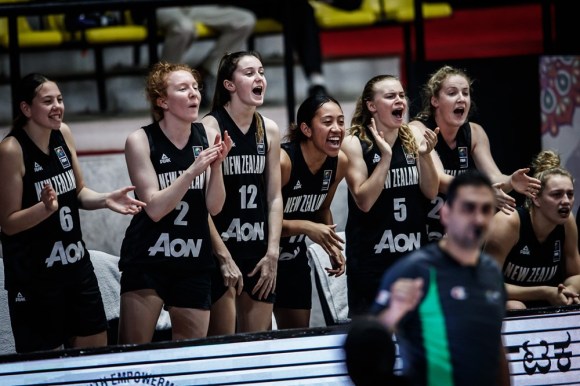 The Aon Junior Tall Ferns finished fifth at the 2018 U18 Asian Championships in Bangalore on Friday after a resounding 75-47 win against Chinese Taipei.

A pair of baskets to Mafua helped the JTF’s to an early 10-2 lead although that was reduced a little by quarter-time, 14-9 the advantage.

New Zealand dealt in free-throws at the outset of the second, Whittaker, Mafua and Emme Shearer each connecting with a brace as the lead moved to 20-13.

New Zealand was charged with a couple of dubious offensive fouls but thanks to a trio of Whittaker baskets led 29-21 in the middle stages of quarter two.

The Kiwi defence was guilty of giving up some uncontested lay-ups at that stage but after shoring up that deficiency were able dominate the closing stages of the half. Corner threes from Shearer and Lewis took the JTF’s to a 37-21 half-time lead.

Whittaker led all scorers with 12 points at the interval.

Six points from Ella Bradley highlighted an even third quarter that also saw scores from the hard working Lewis and Otago guard Olivia O’Neill – NZ ahead 56-39 with ten minutes to play.

Mafua knocked down her third triple of the game but the Kiwi scoring then dried up for a spell as Chinese Taipei closed the gap slightly (60-47).

Any thoughts of Chinese Taipei eating further into the JTF’s advantage were dispelled as Lewis, Bradley, Whittaker and Leger-Walker rattled off a 15 unanswered points between them to finish the contest and tournament in style.

The top four teams progress to the 2019 FIBA U19 World Cup, disappointingly New Zealand miss out on a trip to Thailand next July.