Kereama and Stockill one win away from defending Big V Championship title. 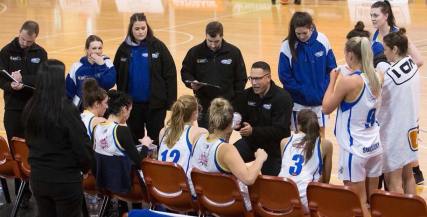 What makes the win even more impressive is the fact that the Sharks had home advantage therefore Sunbury will have games two and three (unlikely to be needed) on their home court next weekend to wrap up the best of three grand final series.

Stockill, in her second season with the Jets, scored 10 points and claimed 7 rebounds in the win.

Sunbury are in search of their third consecutive title after claiming the Division One title in 2016 and the State Championship crown in 2017.

Kereama has been at the helm for all three campaigns and was naturally delighted by his team’s performance.

“Obviously for us it was a great team game of basketball and was good to see us string our best basketball together when it mattered. I’m proud of how the team played and thought the contribution made by all players was valuable. We will go into next week full of confidence and hope to close the series in two games.”

Southern District Spartans won the opening game on Friday 76-63 and wrapped up proceedings with a 90-78 win on Saturday.