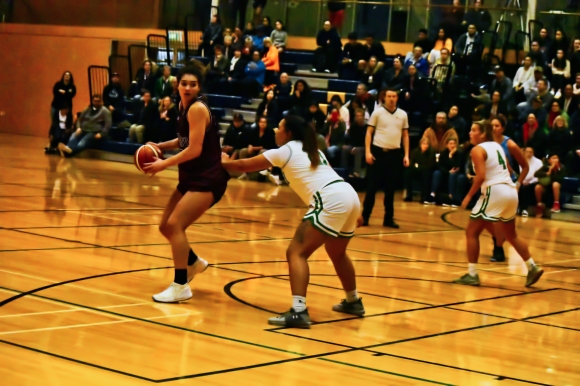 The University of Hawaii Rainbow Wahine eventually proved too strong for New Zealand International Basketball Tours Premiere North pulling away in the final quarter to win 71-57 at Auckland Boys Grammar School on Thursday.

It was a margin that didn’t do justice to the Premiere team’s effort as they led for a time in the third period and only trailed 49-46 with ten minutes to play.

An understandably stuttering start, given that the Premiere team gathered for the first time on the morning of the game and Hawaii only arrived in the country on Wednesday, was shaded by the visitors 18-12.

The Premiere coaching staff were not afraid to use their youngest talent in unison – all four high school players, Tayla Dalton, Jazz Kailahi-Fulu, Shauna Povey and Sharne Pupuke-Robati were on court together ahead of the Rainbow Wahine taking a 31-22 lead into the locker room.

A good sized crowd got behind the home team as they made a strong start to the second half.

The Premiere team made a conscious effort to get the ball inside to forwards Penina Davidson (22 points and 10 rebounds), Makayla Daysh and Pupuke-Robati (10 points) – a tactic that reaped some benefit as the hosts opened the half with a 10-3 run.

Davidson, ahead of her departure to take up a contract with the Adelaide Lightning in the Australian WNBL, displayed her scoring versatility with a long three to compliment some skillful inside work, the Premiere’s taking the lead after additional good work from Donna Fermanis and Arielle Parai.

As expected from a quality NCAA Division I team the Rainbow Wahine responded and carried a 49-46 advantage into the last quarter.

The Premiere’s effort faded in the final minutes, the University of Hawaii closing out a deserved first-up victory on their four game tour of New Zealand and Australia.

After a day of relaxation in Auckland on Friday the Rainbow Wahine head to Christchurch for a game against NZ Premiere South – Sunday, 4.30pm start at Cowles Stadium.

Another entertaining game is in prospect with Tessa Boagni headlining the Premiere lineup. The former California State University Northridge forward was outstanding for the Tall Ferns last month during their gold medal winning campaign at the William Jones Cup.