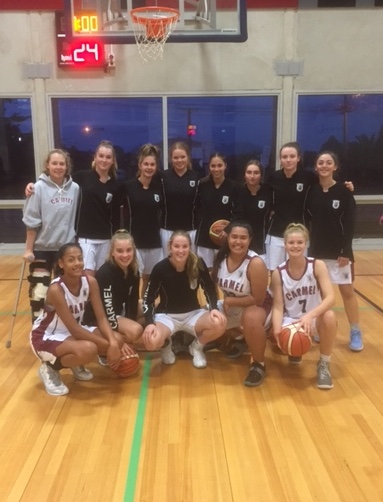 Carmel College marked the halfway point in Auckland Secondary Schools Premier League on Friday with their first win of the season. There were also victories for Auckland Grammar, Westlake Girls and Massey High.

In an exciting game in which the lead changed hands on numerous occasions Carmel eventually prevailed 73-68 on their home court against St Kentigern College.

A series of turnovers proved costly for St Kentigern as they fell behind 10-4 but they recovered sufficiently to trail by just three points (17-14) at the quarter break.

St Kent’s gained their first lead of the game (19-17) courtesy of Emma Halliday early in the second quarter.

The St Kent’s scoring slowed to a crawl but unfortunately for Carmel theirs hit a wall – a Tayla Dalton long three eventually breaking the drought.

A repeat effort made it a one point game (23-22) – St Kent’s ahead 29-26 at half-time. Griffiths had seven points for the visitors – Dalton, on her way to 36 points, had thirteen for Carmel.

Emily Bloomfield opened the scoring for Carmel in the second half and when she scored another inside basket the scores were tied 35 points apiece.

Natasha Leishman scored eight points in the third, a quarter that St Kent’s led for all but the last twenty seconds of – the scores locked 47 points each with ten minutes to play after an Estelle Davidson And-1 play.

Renee Flay restored the St Kent’s advantage early in the final period but unfortunately for the visitors fouled out with seven minutes to play.

Broomfield snatched the lead back for Carmel but Kayla Robertson-Tekki (8 points in the quarter) gave St Kent’s the lead once again (59-57) with four minutes to play.

A series of free-throws followed – the scores locked at 66 apiece with 1:30 to play.

Broomfield made a crucial basket and when Dalton grabbed a steal and made a lay-up with 49 seconds left Carmel finally had some breathing space with a 71-66 lead.

Georgia Green iced the game from the foul line in front of an excited home crowd to register an important first win of the season for Carmel.

Sharne Pupuke-Robati got MAGS off to a reasonable start – nine points meant her team only trailed 13-11 at half-time.

The second quarter was a disaster for the hosts as Auckland, with Mele Latu in fine form, pulled away to lead 27-15 at half-time.

Manase scored ten points, including a couple of triples, in the third frame but Elianna Tuaiti and Heeni Blakey ensured Auckland maintained a decisive lead (43-32) at the three-quarter mark.

Six points each from both E Tuaiti and Zhanay Hettig ensured there would be no late comeback from MAGS as Auckland made it seven straight wins.

In the third game of the round  something of a shoot-out developed between two players who will next month be teammates at the fiba U17 World Cup.

St Mary’s made a terrific start forging a 21-13 lead thanks to a balanced scoring effort including a triple from Alex Moore.

Massey bounced back in the second spell with a dozen points from Povey and a couple of handy contributions from Terina Aratangi to take a narrow 34-32 lead into the half-time break.

Leata Te Nana-Williams landed a triple for St Mary’s but Massey stretched their lead in the third stanza as Ramona Fuiavaa (twice) and Povey also landed from beyond the arc for a 51-42 advantage.

St Mary’s had the better of the final ten minutes as Jazz and Zaaliyah Kailahi-Fulu combined for ten points but it wasn’t quite enough to deny Massey a fourth win of the campaign.

Westlake High made a collective ten threes on their way to a solid 88-73 win at Rangitoto College despite Hannah Wentworth scoring a game high 28 points for the hosts.

Rangitoto opened the game with a 7-0 run but were hauled in by Westlake who entered the quarter time break ahead 23-17 with Jordyn Maddix making two of her six triples in the spell.

Robyn Blackstock scored six points and Wentworth nailed a pair of triples but eight points from Emme Shearer either side of the quarter break and a three from Jess Moors on the stroke of half-time gave Westlake a 44-40 half-time lead.

Maddix completed her half dozen treys in the third stanza and Mareta Davidson chimed in with six points to counter Wentworth’s consistent scoring to ensure Lake led 65-58 at three-quarter time.

Gracie Hasler-Ewins and Bella Elgar tried to cut the deficit but Emma Pugh had other ideas leaving Moors to land Westlake’s tenth triple and carry Westlake to a fifth straight victory.