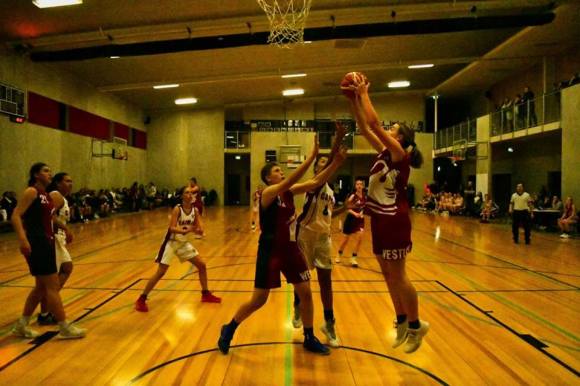 In the fourth round of the Auckland Secondary Schools Premier competition Auckland Girls Grammar and Mt Albert Grammar remained unbeaten whilst St Kentigern College notched their first win of the season.

Merita Davidson scored the first basket of the game, an 8-0 run pulled Westlake ahead 19-9, extended to 26-13 at quarter-time.

Estelle Davidson and Tayla Dalton got the scoreboard rolling in the second quarter for Carmel but Jordyn Maddix and Izzy Pugh replied in quick succession for the hosts. – Carmel coach Gareth Teahan needed a timeout as his team fell 35-17 behind.

Dalton’s triple and Georgia Green’s lay-up improved Carmel’s position although Westlake were in the ascendancy, a brace of baskets from Sophie Dil taking them to a 53-31 lead at the break.

A Jess Moors transition basket and inside baskets from Emma Pugh took Westlake out to 64-39 at the mid-point of the third period, an up tempo spell of basketball ended with Westlake ahead 76-47 at three-quarter time.

Charli Blackman connected with a baseline jump shot and Dalton took her season’s tally past a hundred points as Carmel scored the first six points of the final spell. The Westlake scoring stalled for a while but they were never in danger of forfeiting the two competition points – Maddix and Rosie Dil capping the win with late triples.

For Mt Albert Grammar there was the satisfaction of a come from behind victory and on the other hand Massey High will be smarting from an opportunity lost after MAGS won a tight encounter 84-81 on their home court.

Massey led at every quarter break including a 64-57 lead at the three-quarter mark. Forward Yzabelle Taveo put in a terrific shift notching 11 of her 22 points in the final period but it wasn’t quite enough to hold off the fast finishing hosts.

Jada Manase made her fifth triple of the game in the final period, Sharne Pupuke-Robati made a dozen points and Tessa Tamo-Tomokino seven points as Mt Albert outscored Massey 27-17 over the closing ten minutes to pinch the win and remain unbeaten in 2018.

Earlier the opposing No 8’s Manase and Shauna Povey exchanged threes to get proceedings underway. Ramona Fuiavaa made eight points in the opening quarter to accompany Povey’s 11 points as Massey forged a 24-16 lead.

The third frame was a pretty even affair. Manase added to her three-point tally, as did Fuiavaa, a tasty prelude to a hectic final quarter.

In the battle of the promoted teams St Kentigern College, the Senior A champions in 2017, picked up their first win of the season beating St Mary’s College 70-57.

Auckland Girls Grammar School made it four wins from four outings with a decisive 77-57 victory against Rosmini College.

The competition takes a two week break as many of the players will be involved in U19 Nationals at NSEC over the coming weekend.