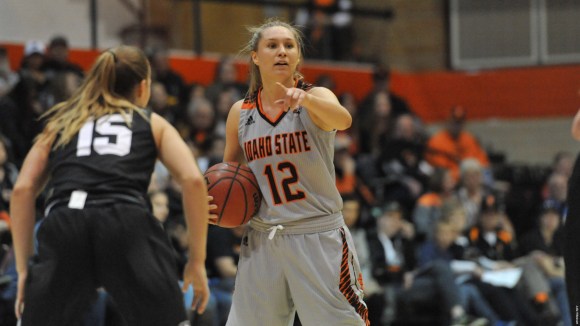 There were a host of Kiwis involved in conference tournament play on Thursday (NZ time). The Kiwi women went 5-0, the men in contrast 0-2.

After a first round win on Tuesday Brooke Blair and Idaho State Bengals were back on the floor against Weber State. Early in the third quarter the Bengals looked down and out as they trailed by a massive 25 points. By three-quarter time the advantage was cut to 12 points – that balance was erased in the fourth with the scores tied at 98 points apiece in regulation The Bengals capped a remarkable comeback to take the win 113-109 in overtime. Blair finished the game with 18 points, including a critical pair of free throws to put the Bengals 106-105 to the good. The senior guard also added 5 rebounds, 3 assists and a steal.

The win sets up a mouth-watering semi-final with the top ranked Northern Colorado Bears on Saturday so it will be Blair and the Bengals versus Krystal Leger-Walker, Tiarna Clarke and the Bears.

As number one seeds the Bears benefitted from a first round bye and entered the fray at the quarter-final stage against Montana today. The Bears proved too good winning 78-69. Leger-Walker produced 8 points (2/3 3PG), 5 rebounds, 4 assists and 2 steals and Clarke 14 points (5/8FG) as the Bears advance to that much anticipated clash with Idaho State.

Having moved passed 1,000 career points in the Big West Tournament win against Hawaii on Tuesday Tessa Boagni and Cal State, Northridge faced UC Santa Barbara in quarter final action today and came away with a 72-63 win. Boagni was again in good form recording 16 points (5/9FG, 6/6FT), 7 rebounds (5 offensive boards), and 4 assists in a fine all-round display. Next in line is No 2 ranked Cal Poly in Saturday’s semi-final.

Seattle University Redhawks beat Kansas City 70-59 in the Western Athletic Conference first round. Jacinta Beckley had 5 rebounds, a block and a steal for the Redhawks but didn’t have the best of shooting nights converting just one from six from the floor for 3 points. Seattle will have it tough on Saturday when they face defending champions New Mexico State.

It wasn’t such good news on the male front with both Sam Timmins and Matt Freeman involved in losses.

Washington Huskies fell 69-66 in overtime by Oregon State in the first round of the Pac-12 Tournament after a 57-all deadlock after the regulation fourty minutes. Timmins had 5 points and 6 rebounds for the Huskies.

It wasn’t a good day for Freeman and the Oklahoma Sooners either as they bowed out of the Big 12 Tournament, going down 71-60 to local rivals Oklahoma State. The Sooners were ranked No 4 nationally in early January but have since lost eleven of their last fifteen games.

Jack Salt (Virginia) and Sam Waardenburg (Miami), carrying first and third seeding respectively, both received byes to the quarter-finals of the Atlantic Coast Conference play-offs. Both will be in action tomorrow for the first time.