Stella Beck showing top form on and off the court. 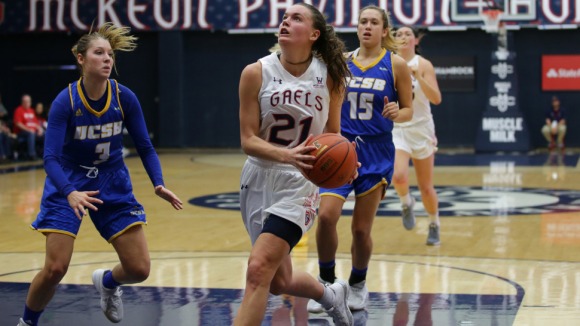 Beck is knowledgeable on and off the court with a 3.63 GPA in Psychology specialising in Neuroscience. She has the distinction of being named to the All-Academic first team for the third straight year.

The 22 year-old has started in all 27 games for Saint Mary’s this season and has scored in double-figures in 21 of those games. In seven outings Beck recorded 20 or more points.

Beck scored her 1,000th career point on November 24 and scored a career-high 31 points versus Pacific on January 20 while averaging 14.8 points per game.  In addition the former Hutt Valley High standout averages 5.8 rebounds per game, dishes out 3.2 assists and is second on the team shooting 59.7 percent from the field. Beck leads the team with 37 steals.

Last week she logged her third double-double of the season in the win against San Francisco (72-64) scoring a game-high 26 points and tying a season-high with 11 rebounds. She followed that up with a 25-point, nine-rebound performance in the win against Portland. Her 51 points across the two games moved her into 15th all-time on the Saint Mary’s career scoring list.