Salt and Virginia to No1 amongst the American college hoops news 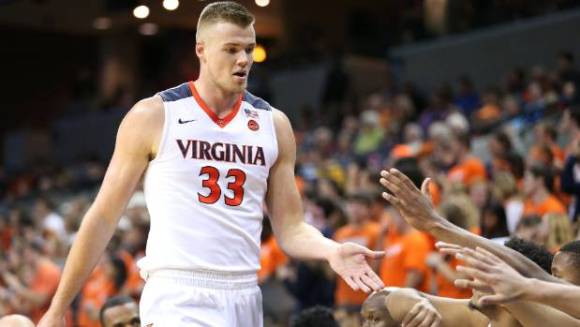 The biggest news in our weekly look at Kiwis in American college hoops is that Jack Salt has helped take Virginia Cavaliers to the Number 1 ranking in men’s basketball. The achievement comes despite Virginia slipping to their first Atlantic Coast Conference loss of the season when they went down in overtime 61-60 to Virginia Tech at the weekend. It’s the first time Virginia have been ranked No 1 since 1982

Tai Wynyard and Kentucky were No 1 in November 2016 but this is probably the first time a Kiwi has been a starter in a top ranked team.

Two other regular starters are Sam Timmins and Izayah Le’afa.

Timmins scored 4 points (2/2FG) and snared 4 rebounds but Washington Huskies lost a thriller in double overtime (97-94) to Oregon State. The Huskies are now 7-5 in the Pac 12 Conference.

There were also some very good performances amongst our top women.

St Mary’s Gaels made a major statement in the West Coast Conference. Not only did they defeat unbeaten Gonzaga 72-56 but also they achieved the victory at Gonzaga. Stella Beck was a major player in the game adding 13 points and 5 rebounds to a game high 9 assists as the Gaels moved to 9-5 in conference games.

Jacinta Beckley was within three points of a career best as she amassed 23 points (7/13FG, 8/8FT) as Seattle Redhawks beat Chicago State 72-60. With its 7-2 record Seattle are now second on the Western Athletic Conference ladder.

Brooke Blair bounced back in style from a poor midweek showing against Northern Colorado when she failed to score for the first time this season. Against North Dakota she rattled off a team high 19 points (6/11FG) for Idaho State Bengals as they won 68-55 to improve to 7-5 in the Big Sky Conference. The 19 points tally moved Blair past 300 points for the season at an average of 13.6ppg.

Despite a fine shooting performance from Tessa Boagni Cal State Northridge Matadors lost 59-51 at home to Long Beach State. Boagni scored a team high 19 points on the back of 7 from 10 from the field including 4 from 5 from distance. The Cantabrian also added 6 rebounds and 2 blocks. The Matadors are 6-5 in the Big West Conference after slipping to a second loss of the week going down 72-46 to UC Davis – 7 points and 7 rebounds for Boagni in that one.

Penina Davidson was one rebound shy of a double-double as Cal Berkeley Bears edged a thriller against Colorado winning 78-76. Davidson scored 10 points (4/9FG) and corralled nine rebounds, which included 5 offensive boards. She followed that with team high’s in rebounds (7) and blocks (3) as the Bears improved to 8-6 in Pac 12 Conference contests with an 84-73 win against Utah on Sunday.

Mary Goulding managed 10 points and 4 rebounds as Fordham Rams moved their Atlantic 10 Conference record to 10-2 with a 58-45 record against Davidson.

Also in the Atlantic 10 Tera Reed, who has been outstanding all season for Virginia Commonwealth University Rams, posted 27 points on 11 from 18 (61%) shooting against Duquesne – but it wasn’t enough with the Rams falling 80-71.

The Rams bounced back on Sunday outlasting St Bonaventure 77-75 in overtime and improving to 3-9 in the Atlantic 10 Conference. Reed filled the stats line with 6 points, 5 rebounds, 5 assists and 3 steals in the win.

Krystal Leger-Walker recorded her first double-double (13 points, 11 rebounds) to help Northern Colorado Bears move to 10-3 in Big Sky Conference play with a narrow 71-69 overtime win against Weber State. The scores were locked at 60 points apiece after fourty minutes, the Bears securing the win courtesy of a triple with just 0.4 seconds left on the clock. Earlier Leger-Walker had tied the game in regulation with her third triple of the game.

Fresno State Bulldogs are now 9-4 in the Mountain West Conference after a 66-60 win at San Diego State. Katelin Noyer pulled down 5 boards to go with 7 points (3/5FG) for the Dogs. Fresno State head coach Jaime White was pleased with the efforts of the former Westlake centre, “I thought she had a good matchup tonight, she came in with poise and finished some shots.”