Double figure outings for Harmon, Fotu and the Webster brothers 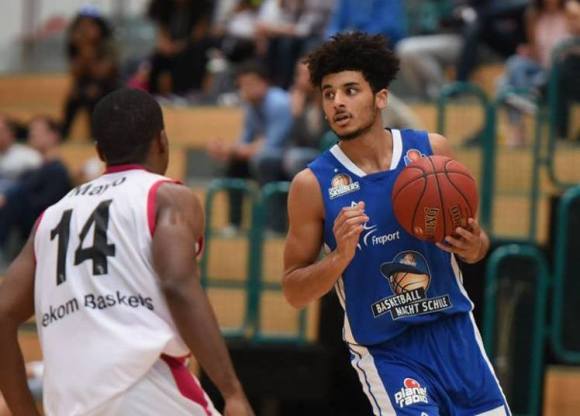 It was largely a successful weekend for our Tall Ferns and Tall Blacks internationals playing overseas.

The German based pair Tai Webster and Isaac Fotu both contributed strongly as their respective club’s registered wins.

Webster scored a game high 21 points (7/11FG), dished 6 assists and reeled in 5 rebounds as Frankfurt Skyliners beat Bremerhaven 95-69. The Skyliners are fifth on the Bundesliga ladder with an 8-4 record.

One win back are Ratiopharm Ulm after an 84-70 win at Giessen 46ers. Fotu was in good form for Ulm scoring 17 points on 8 from 11 shooting. The power forward added 6 rebounds a steal and a block in just 20 minutes of action.

Corey Webster also scored in double figures in Israel but his 15 points (5/9FG) were not enough to save Ironi Nahariya from going down 72-69 against Ironi Nes-Ziona. The defeat sees Nahariya slip to fourth on the Israeli League ladder with a 5-4 win/loss record.

In Italy Napoli (6-4) are up to fourth on the Serie A ladder after a fourth straight win defeating San Martino 84-70. Jillian Harmon was her usual busy self, accumulating 21 points (8/14FG), 6 rebounds and 2 assists.

Melbourne Boomers (11-6) solidified their spot in second place on the Australian WNBL ladder with a couple of wins including an 86-42 demolition of Bendigo Spirit. Kalani Purcell had 9 points (4/5FG) and 9 rebounds in the massacre.

Perth Lynx have claimed an eleventh consecutive victory defeating Sydney University Flames in New South Wales. Cantabrian Toni Edmondson, working her way back after injury, contributed 3 points and 2 rebounds as the Lynx improve to 12-4 to top the WNBL table.

Townsville Fire (10-6) suffered a shock 79-64 home loss to Adelaide Lightning going down 79-64 but bounced back on Saturday defeating Bendigo 99-62. Micaela Cocks added a trio of rebounds and assists to 7 points as Townsville retains third spot.