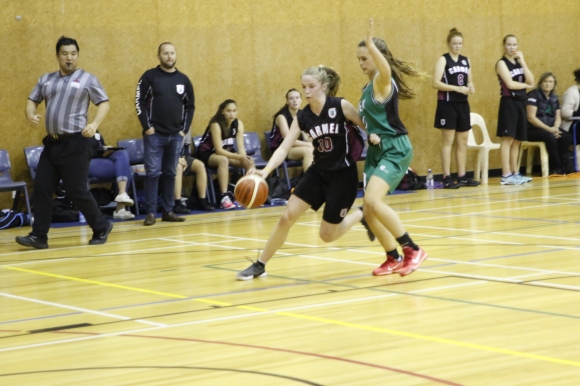 In the latest round of the Auckland Secondary Schools Girls Premier competition Mt Albert Grammar preserved their unbeaten record, Auckland Girls Grammar lost theirs and there was a first win for Carmel College.

Carmel, paced by 31 points from Tayla Dalton, were too good for Orewa College winning 70-46 at Rosmini College gym on Monday night.

Megan Hoare scored a couple of early baskets for Orewa but Dalton had logged eleven by the quarter time break as Carmel led 13-11.

Emily Broomfield made her mark in the second netting 8 points, a period dominated by Carmel, as they extended their lead to 36-16.

Arianna Henare was prominent for Orewa after the break but Dalton kept finding her way to the basket as Carmel led 56-32 at three-quarter time.

Henare and Hannah Wentworth landed threes then a neat inside basket from Holly Kagan-Downer took Orewa on an 8-0 run.

Dalton put an end to that with a brace of scores, Broomfield and Carmen Haybittle added another couple, and Carmel had a deserved first win of the season.

MAGS poured in the points in the second as Trinity Peau and Riana Rangi-Brown combined for 16 to extend the lead to 43-19 at the break.

Peau scored three straight baskets for the hosts, Noon-Duckworth replied with a couple for Rangi but MAGS had eight different scorers in the third period as they finished the quarter with a dominant 69-32 lead.

Tessa Talo-Tomokino and Monica Kelly completed the job for MAGS in the fourth as they moved to the top of the table with a resounding victory.

In the game of the round Massey High School, trailing for the majority of the game, edged Auckland Girls Grammar 72-69 to end AGGS unbeaten start to the season.

Grammar made the better beginning as Teneva Ropati dropped six early points in a 12-8 advantage.

A couple of Mele Latu triples helped keep AGGS in the ascendancy but a three late in the half from Terina Aratangi kept Massey in touch at half-time trailing 33-30.

More good work from Latu and Ropati helped the visitors but back to back treys from Alyesha Schuster meant it was just a two points lead, 53-51, with 10 minutes remaining.

10 points in the final quarter from Zhanay Hettig seemed to keep Grammar on course for another win but Massey had other ideas.

Shauna Povey knocked down a three, Aratangi made six straight points and Tessa Nikolaison an important free throw, as Massey closed back to within two points.

With the home support right behind them Nikolaison made the go ahead basket, a banked three, with two minutes to play.

Massey held firm against a pressing Grammar defence to clinch an exciting 72-69 win.

Victorious coach Aaron Leslie felt the home support made a difference. “The home crowd were amazing they gave us extra legs late in the game.”

The fixture between Westlake GHS and Avondale College was postponed.