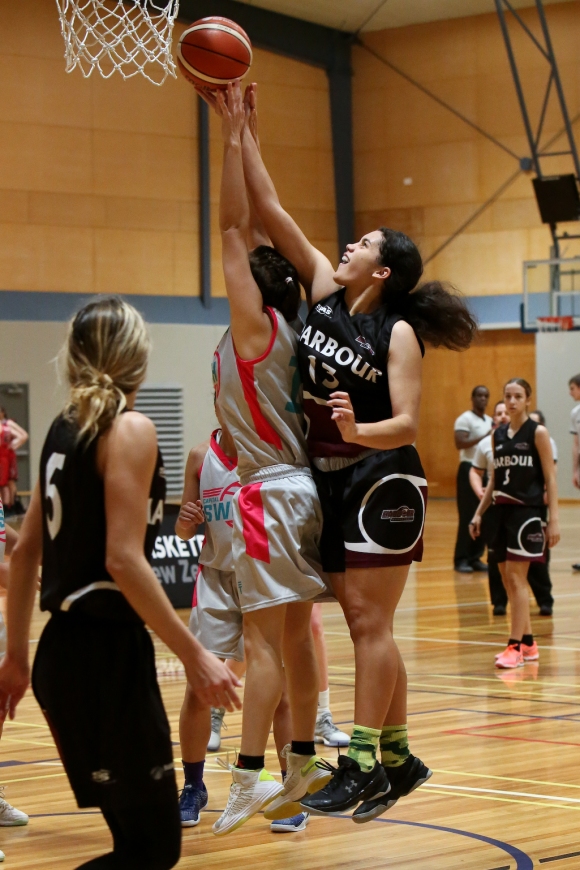 After finishing in the bottom two last season Massey High were forced to play through the qualifying tournament to retain a spot in the Auckland Secondary Schools Girls Premier grade for 2017.

Under new coach Aaron Leslie the team have made a fine start to the season and they were quickly into their work opening up a 19-13 first quarter lead at Rangitoto College on Friday.

Bella Elgar made 5 quick points as Rangitoto made a better start to the second quarter closing to within a point before a Shauna Povey And1 and threes from Alyesha Schuster and Terina Aratangi increased the buffer.

A high paced quarter ended with Ella Moore landing her second triple of the opening half to keep Rangi within striking distance, trailing 38-33 at the break.

Consecutive baskets from Kataleena Leslie were countered by Bella Elgar and Kaitlin Burgess – another Burgess basket tied the scores at 45 apiece with coach Leslie needing a timeout.

The hot hands of Moore and Burgess kept Massey at bay, but only just, 53-51 to the hosts at three-quarter time.

The scoring dried up for both teams in the early stages of the fourth but baskets from Elgar and Moore kept Rangi in the lead, 61-58, with less than three minutes to play. Sylvia Wieczorek banked a bucket and from there Massey, and Povey in particular, took charge.

The shooting guard scored 12 points, including an arching three, down the stretch to seal a third straight win for her team.

A couple of 30 points hauls from Tayla Dalton and Keeley Tini were the features of the Carmel College v Westlake Girls match up.

Courtesy of Dalton and Emily Broomfield, plus a late three from defensive linchpin Izzy Cattermole, Carmel were giving their more fancied rivals a real run for their money and only trailed 42-38 at the break. Dalton led all scorers at the interval with 19 points with Tini scoring 10 points for Lake.

Forward Kristin Talma was making her presence felt and complimenting the work of Tini, the pair eased Westlake to a 62-49 three-quarter time lead.

Millie Simpson scored a couple of late baskets and Dalton (33 points) was tireless for the hosts but the greater depth of Westlake was the telling factor in this one as Westlake finished strongly to record a second straight win.

Orewa College were down a couple of senior players against Auckland Girls Grammar, a team you need to be firing on all cylinders against in its current form. AGGS came out strong as expected and dominated the game from go to woe.

AGGS led 79-8 at half-time before ending a one sided affair 145-13 to the good. Observers report Grammar were still pressing when over 100 points ahead!