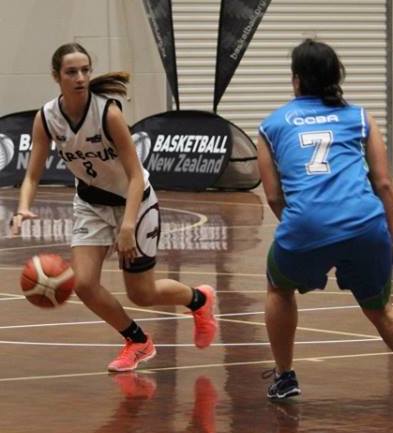 Quality passing from Elianna Tuaiti fuelled transition baskets for Karma Skilton-Roberts and Tyla Tuala while Emme Shearer was the beneficiary of a flowing Westlake offence at the other end.

Elianna Tuaiti picked up two quick fouls in the second taking her to four personal and a spell on the bench. Her presence was missed as a brace of Jess Moors baskets and Shearer free throws pulled Lake to within four points (38-34).

A Tuala three initiated a 7-2 Grammar run at the start of the second half – the run ended by a Piper Minolas basket.

Teneva Ropati scored in transition to stretch the Grammar lead to double figures.

Mareta Davidson and Mele Latu both excelled on the boards for their respective teams as Rionne Papa converted a left hand put back to leave Grammar ahead 68-49 at the end of the third.

A Piper Manolas three and a slashing drive from the same player did little to interrupt Grammar’s dominance in the fourth quarter. The defending champions, with numerous scoring threats playing their part, ran out comfortable winners 91-70

Rangitoto College quickly forged an 18-9 advantage over Avondale College and extended that to 34-17 by half-time. Kaitlin Burgess landed a timely three for Rangi but it was 8 points each from Bella Elgar and Centaine Noon-Duckworth that did most of the damage.

Avondale relied almost exclusively on the scoring abilities of Ngakita Paton-Young and Maclani Michael who both had fine games but they fell further behind in the third to trail 50-23 at the end of the period.

Metissa Edwards opened the Avondale account in the final period but a bunch of different scorers helped ease Rangitoto to a second win of the season.

Massey High also made it two wins from two outings with a relatively straightforward 99-47 win at newcomers Carmel College.

Massey got out to a 25-8 first quarter lead with Alyesha Schuster nabbing 7 early points. Emily Broomfield scored 10 points as the hosts put in an improved showing in the second period but they still trailed 48-23 at the break. Terina Aratangi and Schuster had 10 points each at half-time.

The visitors, with the scoring load shared, continued to dominate in the second half helped greatly by the rebounding efforts of Tessa Nikolaison who accumulated 13 boards in the game.

In the other game Mt Albert Grammar beat Orewa College 93-22 with Trinity Peau a single game high for the season with 42 points.