Basketball New Zealand is embarking on an exciting new era as the game embraces a move into Asia, with the Oceania region now part of a pathway to FIBA events via the Asian region.

Effective from 2017, all New Zealand teams will now be pitched into battle with the best in Asia as they strive to qualify for the likes of a FIBA World Cup or Olympic Games.
While that move brings many financial challenges for a sport, the national body and indeed the teams themselves are embracing the opportunity and in typical fashion, rolling up their sleeves at the thought of the challenges ahead.

Tall Blacks Head Coach Paul Henare loves the new challenge facing him and his team, which will include a first participation at the Asian Cup (Beirut in August) and then the new system of FIBA World Cup Qualifying Windows, with the team being brought together on four separate occasions each calendar year, five next year when you include the Gold Coast Commonwealth Games.

“Things that are quite exciting about the change include the chance to play guaranteed games at home throughout the year. We will play more internationals and gain that exposure through Asia. We will also get the opportunity to expand our overall Tall Blacks group because at different stages throughout the year we are going to call upon players who might not have played for us before. We will have players unavailable at different times, meaning we will go deeper into our playing group for some windows.”

Henare enjoyed a decorated career as a player and now as a coach, and knows what it means to play at home in the black singlet.

“It is such a rare thing to play for your country and pull the black jersey on in front of family at such close proximity, that is special. Look at someone like Mika Vukona who has probably played over 200 games for his country, but very few of them would have been at home, with his family having the chance to watch him play. This new system creates those opportunities and makes a playing career that much more special. And with those games being World Cup qualifiers, it makes them all the more significant.”

Henare is also in no doubt that the exposure of the famous black uniform and Tall Blacks culture at home will have benefits for the wider game.

“The Breakers have had an impact through sheer exposure and popularity, through having Kiwis playing in front of Kiwis on a regular basis they have been able to grow the game. To be able to do that with the national team is only going to help that growth, hopefully the spinoff is having more and more kids wanting to wear the black singlet and be a part of that. In that way, the increased exposure has to be good for our game.”

Henare is quick however to dismiss any thoughts that this will be an ‘easier’ pathway through to FIBA World Cup and Olympic Games tournaments. In fact the new Asia Zone means the Tall Blacks must be within the top seven teams in Asia to qualify for the FIBA World Cup. Before the change, the team needed to be in the top two within Oceania to qualify.

For the Olympics, New Zealand has been required to beat Australia. Now, under the new system, the best performing Oceania-team in the World Cup will directly qualify for the Olympics.
“Playing against Australia was a big challenge and a mountain to climb but by no means is this any less significant of a challenge, largely because of a different set of circumstances that we will face throughout that period.”

There are clear implications on player depth with the new Asian based system, with the Tall Blacks due to play in multiple FIBA qualifying windows throughout the year, meaning greater depth in the player pool will be required.
That places even greater importance on the NZ Select programme, following on from the successful tour to China in 2016, Henare will lead what is essentially a development team back to China and Taiwan in mid-June this year.Many players will be chosen from the NZ NBL, with Henare stressing more than ever before, the importance of that competition.

“The effects of the Select Tours may take a while to come through, the purpose of that programme is to build a base so once the new Asian qualifying format kicks in, we have a wider group of players who have experience in our culture and on the international stage, it won’t be until then that we see the benefits.”
With that in mind, Henare is engaging on a busy NBL tour attending games and talking with teams.

“I have a schedule to get to as many games as I can. The introduction of live streaming and Maori TV coverage is fantastic, but it is important for me to get out and meet with coaches and watch players first hand to get a better feel for how they are going, and let them know I am watching closely.” 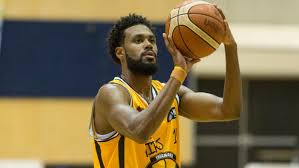 Could Alonzo Burton be on Henare’s radar?