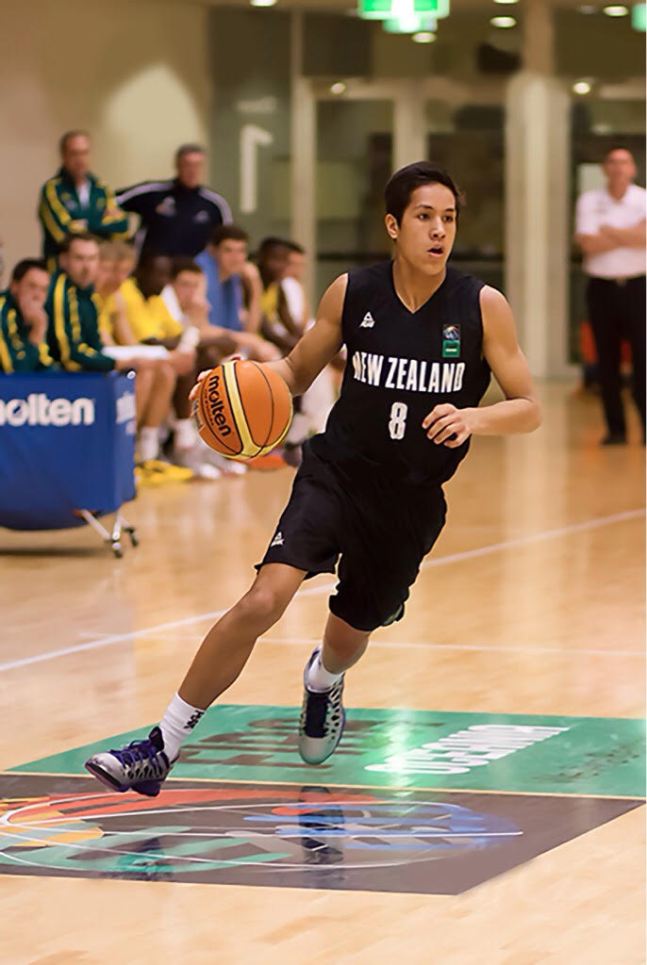 Isaac Letoa was a key player for the Junior Tall Blacks back in December when New Zealand defeated Australia in the FIBA Under 18 Oceania Championships in Fiji.Later this year he will combine his basketball and educational talents when he takes up a full academic scholarship at Ivy League school Dartmouth College.

When there he will become a key member of Dartmouth College Big Green’s having committed to the basketball programme for the next four years.

“We are thrilled to have Isaac become a member of our programme and Dartmouth family,” said Dartmouth Men’s Basketball Head Coach David McLaughlin.

“He embodies so much of what we look for when evaluating: A love for the game, a winning and competitive approach every time he is on the court, high basketball acumen, and a work ethic where he truly wants to get better each day. Isaac is a young man of very high character who we feel will have an immediate impact on our team and within the Dartmouth community.”

Letoa moved to Auckland from Wellington in 2013 and has been a member of the Westlake Boys High School team for the past 3 years, captaining the team in 2016.

He joins a long list of outstanding Westlake players that have taken up scholarships at NCAA Division 1 colleges including Kirk Penney (Wisconsin), Rob Loe (St Louis), and Tai Webster (Nebraska).

He has also been a member of the Breakers Academy for the same length of time.

SKYCITY Breakers assistant coach and head coach of the Academy Mike Fitchett is in no doubt what qualities Letoa has that set him apart from most young players in New Zealand.

“Isaac has great defensive ability, plays with intensity and has a terrific work ethic,” says Fitchett.

“He has the capacity to stay in front of quick ball handlers and demonstrates great commitment on defence which you don’t see from a lot of young players. He also has the ability to penetrate at the offensive end and his perimeter shooting is improving,” added the Breakers assistant coach.

Before heading to Dartmouth to study engineering Letoa has the small matter of the FIBA Under 19 World Championships to prepare for. The JTF’s point guard has linked up with the Wellington Saints for the current NBL season to improve his game ahead of college and the championships that will be played in Cairo in the first week of July.

“Right at the moment I want to acknowledge Kevin Braswell who is really pushing me at Saints training and helping me to prepare for the World Champs and college ball,” said Letoa.

There are many other people the 18 year old credits with his sporting and academic achievements.

“Shawn Beck who took the time to organise the initial contact with colleges and endorse me as a person and Wellington College and Westlake Boys High School for preparing me academically, supporting my basketball and encouraging me to take leadership opportunities. Also the Westlake Old Boys Association, ‘The Westlakers’ for their support and encouragement.

”Judd Flavell and Mike Fitchett in their roles as Breakers Academy coaches for shaping me as a player, encouraging me as person and putting me forward for consideration for overseas opportunities like Nike NBA and Adidas Nations camps.

“Harbour Basketball CEO John Hunt for the great Rep programme he runs on the Shore and Basketball New Zealand for providing opportunities to compete at a high level from Korus, to NZ age groups, 3×3 and now the JTBs.

Last but not least Letoa pays a special tribute to his family.

“Without question my family deserves full acknowledgment. My father (Fata) has been closely involved having been a coach and a mentor throughout the majority of my life. Jordan, my older brother, has had a similar role in my life. Getting beaten in nearly everything we competed in, you learn to hate losing! My Mother (Paula) has very much had a behind the scenes impact that she doesn’t really get credit for; she has worked extremely hard to support my goals whether they’re basketball-related or not.

“All my extended family and many friends who have contributed so much to fundraisers and in many other ways over the years. I wouldn’t have got this far if it weren’t for them helping me get overseas to be seen,” said a grateful Letoa.

As you can imagine the family are extremely proud of Isaac.

“Paula, Jordan and I are incredibly proud of this opportunity as we have seen first-hand the consistency of dedication and effort that has led to it. Isaac and others like him play sport for school, region, country and sometimes club resulting in many trainings per week and still muster the energy consistently to keep up with, and at times excel, in schoolwork,” said Fata.

“But as he’ll be the first to say, none of it would be possible without the huge support of our extended families, the Breakers, the fantastic teachers and staff at Westlake Boys, and the many friends and supporters who have dipped into their pockets for countless fundraisers to get him overseas over the years. It has definitely been a big team effort and we’re hugely grateful.

“We want to acknowledge his brother Jordan especially, who has played a huge role in the family over what has been a tough year. Both our sons are made of tough stuff and shine in their own ways and once again, we just couldn’t be prouder of them.”

All in basketball will wish Isaac Letoa well as he prepares for the exciting journey ahead at Dartmouth College.