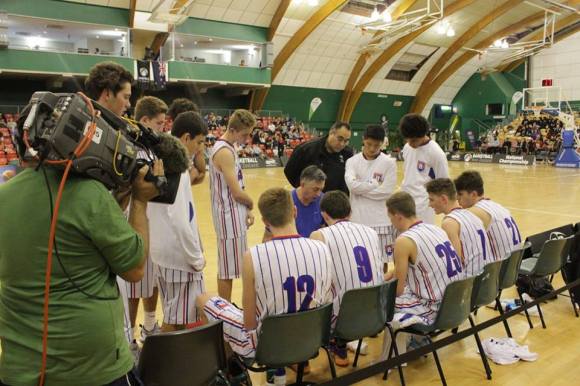 St Peter’s saw off the challenge of Mt Albert Grammar while Rangitoto College survived a stunning second half comeback, likely one of the greatest in the history of the tournament, to thwart Palmerston North Boys.

A big crowd packed the Manawatu Arena for what turned out to be a sensational Boys Final featuring the home team Palmerston North Boys and Rangitoto College.

At half-time Rangitoto were in cruise mode leading 60-35 but what transpired in the second half was remarkable.

If it had been all Rangi in the first half it was all Palmy in the third quarter as they mounted a 31-8 charge inspired by 20 points in the period from centre Callum McRae. Palmy closed the third just two points adrift 68-66 and the delirious home crowd was in full voice.

After the two teams exchanged baskets for large chunks of the fourth the frenzied Palmerston onslaught appeared to have been quelled by Rangi as Sam Waardenburg and Kaycee Anibueze scored back to back baskets that gave Rangi a 77-73 lead with a just two minutes to play.

Haize Walker was fouled on the drive and he made the first of two free throws to edge Palmy ahead 80-79 with just 7 seconds to play.

The second freebie was missed. Rangi secured an untidy rebound, worked the ball just over the half way line to Cameron Stone and he launched a speculative three point attempt.

As the full time buzzer sounded the ball found nothing but net and Stone was submerged by a sea of Rangi players. A courageous, remarkable comeback by Palmerston was denied – Rangitoto home by the skin of their teeth 82-80.

The lead grew to 39-18 as Sam Waardenburg and Zack Te-Puni connected from long range prompting a Palmerston timeout.

Rangi were almost unstoppable as they headed to the half-time break 60-35 ahead on the back of shooting splits 63/71/100. Six players landed shots from beyond the three point arc as they jointly connected with a stunning 10 from 14 attempts.

Palmerston North started the third with a 12-4 run as they consistently went inside to centre McRae. The tactic continued to work dividends as the 7 footer proved almost impossible to stop.

The momentum stayed with Palmerston North before Stone had that final say.

Tournament MVP Sam Waardenburg remembers it as the craziest game he has ever been involved in.

“Just the way it ended, my last high school game ever, with a great group of guys, it was ridiculous I still can’t believe it.

“I knew there were seven seconds left after the free throw shot but after that went up there was a lot of loose ball stuff going on I had no idea how long remained.

“I’m just so happy Cam let the shot fly. It was just a crazy moment and I had no idea if there was time left or the game was over.

“I have huge respect for the Palmy boys, they were gracious in defeat and the haka that their team and supporters performed after the game was awesome,” he added. 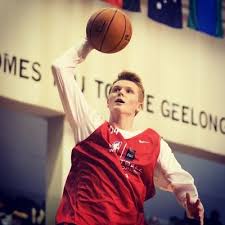 The 3rd/4th play-off game was won 63-56 by New Plymouth Boys against Auckland Grammar.

The sustained excellence of Charlise Leger-Walker carried St Peter’s School Cambridge to a second consecutive title. She produced a stunning 35 points (14/28FG) and added 14 rebounds. There were terrific supporting roles from fellow Junior Tall Fern Kendell Heremaia, junior international Ella Bradley and the tireless Georgie Edgecombe but it was Leger-Walker who stole the show and led her team to victory.

St Peter’s led 21-18 at the end of an entertaining opening quarter. Both teams, relying on key players playing big minutes, appeared fatigued but Leger-Walker landed a banked three on the stroke of half-time to keep St Peter’s ahead 32-27 at the interval.

The Junior Tall Ferns guard led all scorers with 15 points at the break, teammate Heremaia had 9 points. For Mt Albert the forward duo of Trinity Paeu (10pts) and Sharne Pupuke-Robati (9pts) led the scoring.

Manase led a Mt Albert surge early in the fourth as they closed to within 6 points, 57-51 with just under five minutes to play. However, St Peter’s defensive specialist Edgecombe snuffed out any thoughts of a sustained Mt Albert effort. She snared a pair of steals and made baskets on successive plays for St Peter’s to extend to 65-51 and break the Mt Albert resistance.

Mt Albert battled hard but there was nothing left in the tank and St Peter’s ran out deserved winners.