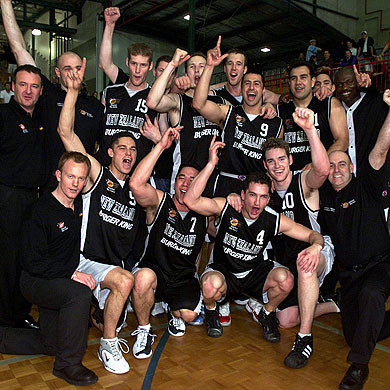 It certainly doesn’t seem 15 years ago that the Tall Blacks sealed an historic victory against the Australian Boomers to win the FIBA Oceania Championships and book a passage to the 2002 World Championships.

The Tall Blacks won the first fixture of the three game series in Wellington 85-78 but when the second game was lost  81-79 in overtime, the following day, at Mystery Creek many felt the hosts had lost their chanced to progress.

However a third game in as many days went the way of the Kiwis 89-78 in front of a raucous crowd at North Shore Events Centre and history was made. The Tall Blacks led 70-67 at three-quarter time and turned the defensive screws in the final period keeping the Boomers to just 11 points.

Aussie coach Phil Smythe is probably still having nightmares about game three but for all associated with New Zealand basketball the series and that result on September 23rd, 2001 will stay long in the memory.

Dickel, Jones and Cameron would be guaranteed spots with Boucher and Henare both coming into the reckoning as role players from the 2001 group. Sean Marks from the World Champs squad would compliment Pero nicely in the front court.