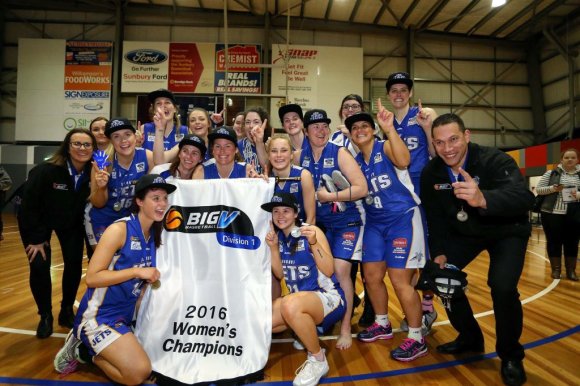 The Sunbury Jets, with Tall Fern Jess Bygate to the fore, have gone 24-0 this season and in the process claimed the Big V Division 1 title.

On Saturday the Jets, leading the best of three grand final series 1-0, comfortably disposed of Geelong Supercats 79-54 to clinch the title – Bygate contributed 12 points in the win. The starting power forward shot 5 from 8 from the field and added a couple of free throws in 23 minutes of action.

Having won 62-41 in Geelong the previous weekend the Jets were pushed, until half-time at least, on their own court.

The Kennedy Kereama coached Jets secured the title in the third with a blistering 27-10 period in front of an enthusiastic crowd packed into the Hangar.

Kereama, also head coach of the Tall Ferns of course, was naturally extremely satisfied with his team’s achievements.

“I am really proud of my team going undefeated, the only State League team in Australia to do it. To win a championship after putting in so much hard work is a nice reward for the players, staff and club. It was even better to do it on our home floor where we could share it with our home supporters and members.

“We have built a programme that prides itself on defence and that plays unselfish offence on the other end of the floor. Statistically we have led the league at both ends.

“I have been lucky enough to be able to bring in a few players I have coached in state leagues around Victoria from my SEABL days and to bring in an incredible import in Courtney Duever plus a national team member in Jess Bygate. Then I had a great blend of local talent. All these players have completely brought into my style of play and worked their butts off!

“So it’s great to be rewarded with a championship on our home court,” Kereama added.

The success of Kereama and Bygate brings the curtain down on 11 months of continuous action by out Tall Ferns and Tall Blacks overseas.

There will only be a short lull before the action begins again in the Australian NBL and WNBL in October. The European season also begins in early October with the American College season tipping off in November.