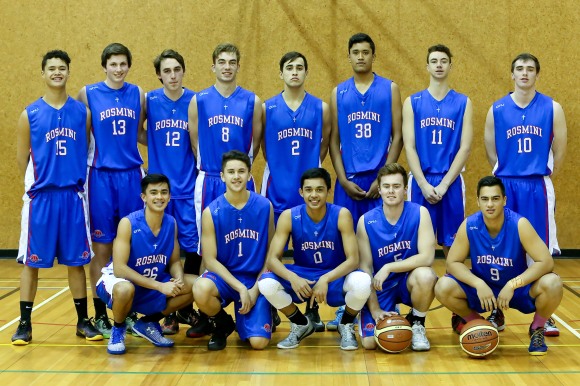 Taine Wattie scored the first six points of the game with transition baskets (he had ten points in the first quarter) prompting Jeff Fahrensohn the Kelston coach to call an early timeout. His charges scored the next four points and were well in contention at quarter time trailing 14-12.

A Sam Brooking three kept Kelston within a single point and Matangi Prescott’s drive broke a 6-0 Rosmini run who led 28-20 at the mid point of the second.

As in the second quarter Sam Brooking snapped a Rosmini run at the outset of the second half. Each time Rozza looked as if they would break the game open, Kelston would answer.

However in the closing stages of the third quarter Rosmini finally gained the ascendancy they were seeking with inside baskets from Sam Bowden, Peter Jenkins and Will Heather plus back to back Ben Turpin treys. The scoring burst increased the Rozza lead to 71-50 at the three-quarter mark.

The reliable Lawson scored the opening basket of the final quarter his team making a 10-2 run before Mitchell Dance landed from downtown to give his team a 75-61 lead with 7 minutes to play.

Kruz Perrott –Hunt landed a three as Rosmini bossed the closing stages to win their 10th straight game however Kelston, with just six players on the night, played with great heart and pushed the regular season runners-up for three parts of the game.

Boys Premier Grade Final Standings at the end of the regular season. The top four teams will contest the semi-finals on Friday August 19th.