Rhyannon Poto and Sharne Robati were outstanding for MAGS showing great composure throughout a tight encounter.

Auckland entered the game with an unbeaten record and but for some missed opportunities from the foul line could have recorded their eighth straight win of the season. However MAGS led by Moanikah Vaai executed well down the stretch to secure a narrow win, a win that opens up the championship race.

Both Rangitoto College and Orewa College were shorn of a little firepower in their game but Rangitoto, with more depth, coped better with the absences winning 100-42. 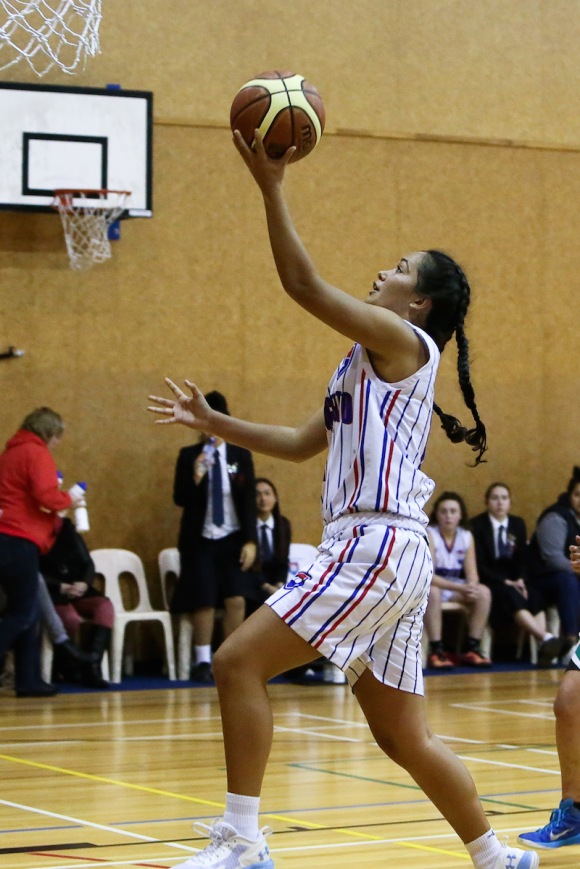 Grace Hasler-Ewin helped herself to eight first quarter points as Rangitoto opened up a 22-12 lead.

Full court pressure from Rangi in the second period took its toll on the seven-player Orewa rotation. A series of turnovers from the green and blacks contributed to the 60-21 advantage enjoyed by Rangitoto at half-time.

Katie Diakhaby opened the second half scoring for Orewa and a Wentworth triple also helped their cause, as did improved defence that stalled the Rangi scoring.

A timeout from Rangitoto coach Ang Perrott-Hunt worked a treat as Burgess converted a triple, and along with Hasler-Ewin, the pair dominated the scoring to help Rangi to a 79-33 three quarter time lead.

Riana Rangi-Brown scored back to back baskets for Rangi, replicated by Diakhaby at the other end, but Rangi stretched their lead to 84-37 with 7 minutes to play.

Hasler-Ewin, off to Melbourne next week with the New Zealand Under 16 team, continued to show a nice scoring touch as did Robyn Blackstock – Rangitoto comfortable winners.

Westlake captain Rosie Davison scored 8 early points as the hosts raced to a 16-1 quarter time lead. St Kents made a much better fist of things in the second matching Westlake basket for basket to reach half-time 30-15 down.

Westlake went on to dominate the second half as Tiarna Clarke, Sia Talafou, Keeley Tini and the typically energetic Chanel Brodeur-Muir stretched the advantage.

St Kentigern, despite only having six players, competed to the end with Vilisi Tavui leading their effort with 12 points.

In the final game of the round Massey High School were pipped 79-74 by Avondale College. Massey led 46-42 at half-time but Avondale leveled by three-quarter time, the scores locked at 61 apiece.

Despite 23 points from Shauna Povey and a monster double double (12 points and 27 rebounds) from Sylvia Wieczorek Massey were run down in the final period.