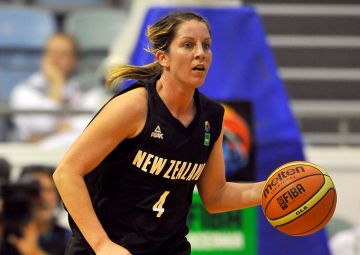 In the words of New Zealand coach Kennedy Kereama, “The beast was awoken”, as Spain avenged yesterday’s defeat at the hands of the Tall Ferns to win 80-60 in Oviedo on Thursday.

Smarting from their 54-52 defeat at the hands of the Tal Ferns the previous day, world number three ranked Spain made a telling run in the second period to lead 45-29 at half-time.

The third quarter was an even affair, a late Hunter triple keeping the Kiwis in touch, down 66-49 at the last break.

Any thought of another upset were snuffed out in the final period as the Ferns were kept to just 11 points, Spain easing to a twenty points win although Kereama felt the scoreline didn’t do justice to his team’s effort.

“Tonight’s margin was not a true reflection of how close the game was at different stages. I think Spain shot the ball tremendously, making tough contested shots; I don’t know if they will shoot that well again.

“I thought the game was pretty similar to yesterday in terms of our scores, they just made more trips to the foul line and shot a better percentage than we did.

“I am confident that we are performing well and in tune for the Olympic Qualifying Tournament, the excitement is building for the most important part of our campaign.”

Micaela Cocks led the Kiwi scoring with 18 points and there were good contributions off the bench from Beck and Hunter but the usually reliable Toni Edmondson only managed two points although the Cantabrian did dish a game high 6 assists.

Davidson and Jillian Harmon, the only other Kiwi to score double figures, helped ensure the rebounding count was even and there was good production off the bench from Beck and Hunter as the Tall Ferns gave another good account of themselves in there final game ahead of the Olympic Qualifying tournament next week.