The Australian WNBL Major Semi-Final was expected to be a tight affair but the Lynx dominated from start to finish eventually winning 92-71 to book themselves a place in the Grand Final series in a couple of week’s time. Micaela Cocks scored 12 points (4/8FG) and Chevannah Paalvast 4 points (2/3FG) on a day when the Fire was well and truly subdued.

Not all is lost for Townsville as they host South East Queensland Stars in a do or die Preliminary Final next Sunday, the winner to meet the Lynx. 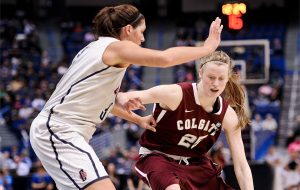 Following a 16th straight win Brigham Young Uni-Provo Cougars has risen to No 22 on the NCAA Division 1 rankings. The West Coast Conference Regular Season champions were much too good for Portland dominating from start to finish to win 84-59 on Thursday. Kalani Purcell finished the game with 12 points, 7 rebounds, 4 assists and a couple of steals.

Somewhat surprisingly the Cougars lost its final regular season game on Sunday going down 73-55 at Gonzaga. Despite the loss Purcell managed to chalk up her 16th double double of the season adding 13 rebounds to 10 points.

In the same conference Stella Beck’s St Mary’s Gaels (14-4) wrapped up second place in the WCC with a 72-59 victory against San Francisco. Beck continued her recent good form with 11 points, 7 rebounds, 3 assists, 2 steals and a block.

Cal State Northridge Matadors gave unbeaten UC Riverside a 25-14 first quarter start and a lead that proved too big to pull back. The Matadors slipped to 4-9 in Big Western Conference games after losing 84-62. On a positive note, after a quiet sequence of games, Tessa Boagni bounced back into form with 13 points, 6 rebounds and a steal.

The University of California Berkley Golden Bears rounded out its regular season with two home games at the weekend. On Friday Penina Davidson (7pts) went 3 from 3 from the field including a score from her only shot from beyond the arc as the Bears beat Oregon 65-54.

On Sunday Oregon State were too strong for the Bears winning a low scoring contest 54-44. Davidson managed 4 points, 4 rebounds and a block in that one. The Bears finished with a 4-14 record in Pac 12 Conference play.

Jillian Harmon and Le Mura Lucca roll on in the Italian Serie A now boasting an 18-1 record. Despite having to wear a spare set of uniforms provided by their hosts, due to a color clash, Lucca disposed of Oriveto 66-46 with Tall Ferns forward Harmon scoring 13 points.