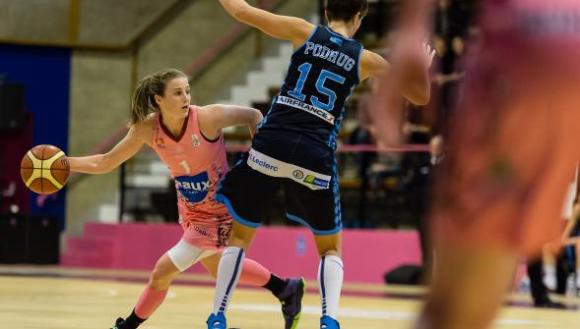 Jillian Harmon’s Le Mura Lucca met last season’s champions Famila Wuber Schio in the game of the round in the Italian League. Both teams were unbeaten but Lucca underlined their title credentials with an impressive 63-47 away victory. Jillian Harmon was one of three Lucca players in double figures the Tall Ferns forward scoring 13 points to go with triples in assists, rebounds and steals.  A 21-5 third term was instrumental in Lucca’s ninth straight win.

Perhaps the Kiwi performance of the week belonged to guard Erin Rooney who helped guide Calais to just their second win of the season. Rooney scored 18 points and dished 7 assists as Calais beat Angers 69-63 in the French League.

An absorbing back-and-forth contest between two top four sides saw scores locked at 72 at the end of regulation but the defending champions wouldn’t be denied in the extra period.

Micaela Cocks played over 40 minutes, logging the most minutes for the Fire, contributing 11 points, 6 rebounds and a couple of assists as the Fire improve to 8-4 and leapfrog Sydney to second place on the WNBL ladder.

After a couple of good wins recently Adelaide Lightning (4-9) got off to a horrendous start in their encounter with South East Queensland Stars. The Lightning found themselves 30-10 down at the end of the first period and although they didn’t lose any of the remaining three periods they still succumbed 72-61. Tall Ferns forward Jess Bygate came off the bench to notch 6 points for the Lightning.

BYU defeated in-state rival Utah 73-59 in Provo Saturday afternoon improving to 8-3 for the season. Purcell finished the contest with nine points, a team-best 12 rebounds, four assists and three steals before fouling out in the fourth period.

St Mary’s Gaels, like BYU, also have a good win-loss ratio. The Gaels used another strong fourth quarter to defeat Washington State 75-71 on Saturday and with the win, Saint Mary’s improved to 8-2. Stella Beck registered just two points but did garner 5 rebounds and dish 3 assists.

Josie Stockill has been showing strong form for Colgate University but the Raiders came a little unstuck against Connecticut. Colgate’s home venue, Cotterell Court was sold out for the visit of the nations No 1 ranked Connecticut who delivered on their star billing winning 94-50.

Stockill, as expected, was a little less productive against UConn but she still managed 6 points, 5 rebounds and the customary blocked shot.

On Saturday Colgate went down 80-50 to Gonzaga and Stockill had three points, 4 rebounds and three blocks. That increased her season total to 31 blocked shots and her career number to 167. She needs three more to tie Colgate’s all-time record of 170.