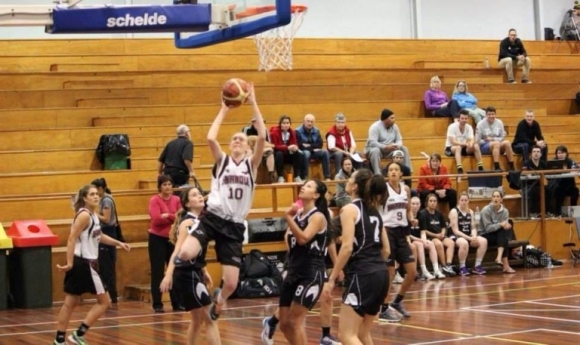 Round five of the Mexicali Fresh Summer Jam women’s competition featured the game of the tournament to date as Team Sky prevailed in overtime against The Suns.

The scores were locked 59 apiece after 40 minutes but four points from Annabelle Jenkins, a three from Breana Jones and a trademark baseline drive from Deena Franklin propelled team Sky to a 68-65 victory.

Earlier Franklin had an opportunity to win the game in regulation time – the former Tall Ferns forward was fouled on the last possession but could only make one of the resulting free throws.

The game began with the Suns forging a narrow 20-15 advantage which had been trimmed to a single score, 32-30, at half time Jenkins (12pts) led all scorers at the interval.

Sky held the upper hand at three quarter time 46-43 but neither team could establish a decisive lead and the first overtime period of the competition almost seemed inevitable.

The forward battle between Franklin and Jenkins in the blue corner and Kelcy Ballantyne and Jody Cameron for the Suns was an intriguing one. Neither pair was giving an inch and as the scoreline suggests the contest was even, Jenkins and Franklin just doing enough in the final five minutes to shade an excellent contest.

The early game of round 5 was dominated by the Storm who swept passed the Sparks 88-52.

The Sparks did briefly hold the advantage as Georgia Perrott-Hunt and Rebecca Hughes made early baskets but Milomilo Nanai and Jordan Hunter helped propel the Storm to a 17-11 advantage extended to 42-25 by half-time.

Forward Millie Nathan was displaying a nice scoring touch around the hoop and led all scorers at the break with 12 points.

Nanai converted a nice spin move to open the second half scoring. Hailey Purcell replied with a three for the Sparks but a couple of threes from Jordan Hunter and 6 points in the final quarter from Coola Baudry helped seal a decisive Storm win.