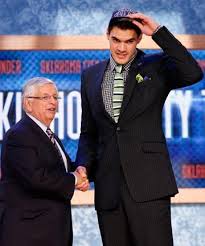 With Tall Blacks head coach Nenad Vucinic due to announce his trial squad any day now for the upcoming internationals against China and Australia, I thought it an opportune time to undertake a bit of crystal ball gazing.

Imagine if Vucinic could call on a starting five of Lindsay Tait, Kirk Penney, Tom Abercrombie, Mika Vukona and Alex Pledger backed up by the Webster brothers Corey and Tai, Leon Henry, Steven Adams and one out of BJ Anthony,  Casey Frank, Rob Loe or Jeremiah Trueman. Now that would be a team capable of giving the Australian Boomers a real run for their money.

Unfortunately, not all of the above will be available for the two games to be played in August. Adams, understandably has more pressing engagements with the NBA, Penney is resting from a strenuous season in Turkey and Loe (and Isaac Fotu) have US college commitments. Other fringe players like Everard Bartlett are carrying injuries therefore picking a team is not entirely straightforward.

Mika Vukona will again captain the team from the power forward position. Vucinic experimented by giving Vukona some game time in the three spot last year but that was largely forced on him because of Tom Abercrombie’s unavailabilty due to injury. Now, with Abercrombie restored to good health he, Vukona, Pledger, Tait and Corey Webster will make a small but balanced starting five. It was a bit of a concern watching the Saints v Giants game last night to see Tait sitting out the game due a thumb injury. Vucinic and his coaching team will be hoping this is not a long term injury as experience cover at point guard is not plentiful.

BJ Anthony was also unavailable for the 2012 international programme but he seems a certainty to be the back up to Vukona. BJ is having an outstanding season for the Otago Nuggets averaging 21.1 points and 8.7 rebounds per game. Casey Frank has served the Tall Blacks well over many seasons, he is playing as well as ever for the Saints and his experience and nous are well recognised within the team. He will be needed to play some minutes at centre and forward.Leon Henry is also having a good NBL season with Southland Sharks. He is averaging 16 points a game including an impressive 43% from behind the three point arc, form good enough you would imagine to retain the reserve swingman position. Tai Webster made a favourable impression on his Tall Blacks debut last year. Like his brother he can cover both guard spots so expect him and the dependable Jarrod Kenney to fill the remaining back court spots.

Vucinic’s options are limited but still expect a couple of surprises when the squad is announced for the trials to be held in Auckland, July 16-17.

Last year Tai Webster was catapulted from school basketball into the international arena and Isaac Fotu made the same jump in 2011. This year I expect Jack Salt to be the bolter. At 6’10” the Westlake Boys High School sports captain has the attributes to be a prominent player in the Tall Blacks programme over the coming years. Another young up and comer is Reuben Te Rangi. Last year’s Junior Tall Blacks captain has recently secured a full contract with the Breakers and is also coming of a good season with Southland Sharks where he has been under the tutelage of Tall Blacks assistant coach Paul Henare.  Other dark horses are Brooke Ruscoe, Rory Fannon (both Nelson Giants) and Brad Anderson (Taranaki).

Expect Josh Bloxham and Jeremiah Trueman to be in the mix along with Everard Bartlett if fit but don’t expect Hayden Allen to be named as he is unavailable due to personal reasons. Understandably the basketball news is all about Steve Adams and the Oklahoma City Thunder at the moment but it will soon shift to the Tall Blacks and a couple of new faces – which faces is the question.

Following the trial a squad will be announced for a tour to China departing July 22. The two week tour will be followed by the series against Australia.